Sergeant Reckless: The True Story of the Little Horse Who Became a Hero (Paperback) 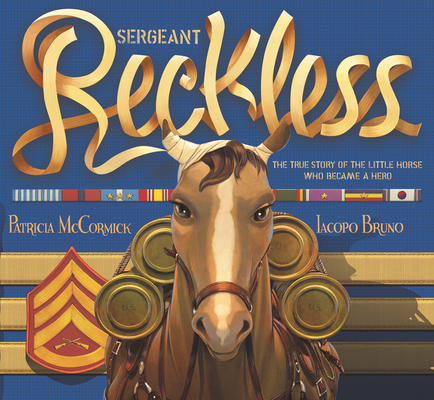 By Patricia McCormick, Iacopo Bruno (Illustrator)
$8.99
On Our Shelves Now

The inspiring true story of Reckless, the brave little horse who became a Marine. This nonfiction picture book is an excellent choice to share during homeschooling, in particular for children ages 4 to 6. It’s a fun way to learn to read and as a supplement for activity books for children.

When a group of US Marines fighting in the Korean War found a bedraggled mare, they wondered if she could be trained to as a packhorse. They had no idea that the skinny, underfed horse had one of the biggest and bravest hearts they’d ever known. And one of the biggest appetites!

Soon Reckless showed herself more than willing to carry ammunition too heavy for the soldiers to haul. As cannons thundered and shells flew through the air, she marched into battle—again and again—becoming the only animal ever to officially hold military rank—becoming Sgt. Reckless—and receive two Purple Hearts.

Patricia McCormick is a former journalist and a two-time National Book Award finalist whose books include Cut, Sold, Never Fall Down, The Plot to Kill Hitler, Sergeant Reckless: The True Story of the Little Horse Who Became a Hero, and the young readers edition of I Am Malala. Patricia lives in New York. You can visit her online at www.pattymccormick.com.

Iacopo Bruno is a graphic designer and illustrator. He is also the illustrator of the acclaimed books Mesmerized: How Ben Franklin Solved a Mystery that Baffled All of France and Anything But Ordinary Addie, both by Mara Rockliff. He lives and works in Milan, Italy, with his wife, Francesca. Learn more about Iacopo at www.theworldofdot.com and www.iacopobruno.blogspot.it.

★ “Vividly brings to life the story of Sergeant Reckless, the only animal to officially hold military rank in the United States. This endearing story of wartime camaraderie won’t soon be forgotten.”

“[An] intriguing historical tale of an underdog. A warm human (and horse) interest story that feels fresh off a newsreel.”
— Kirkus Reviews

“A lively look at wartime animal heroism.”
— Bulletin of the Center for Children’s Books

Praise for THE PLOT TO KILL HITLER: “Offers a lucid history of the rise of Nazi Germany and a dramatic account of one man’s resistance to evil.”
— Publishers Weekly (starred review)

Praise for THE PLOT TO KILL HITLER: “[A] tragic, inspirational, and quite unusual tale of a man who was the moral center of a resistance movement that, though it failed, continues to live on in international memory.”
— Booklist (starred review)

Praise for THE PLOT TO KILL HITLER: “Readers will discover how compelling a story about ideas and ideals can be.”
— Bulletin of the Center for Children’s Books

Praise for NEVER FALL DOWN: “One of the most inspiring and powerful books I’ve ever read. Never Fall Down can teach us all about finding the courage to speak our truth and change the world.”
— Archbishop Desmond Tutu

Praise for SOLD: “Hard-hitting ... poignant. The author beautifully balances the harshness of brothel life with the poignant relationships among its residents.”
— Publishers Weekly (starred review)

Praise for CUT: “This novel, like Laurie Halse Anderson’s Speak, sympathetically and authentically renders the difficulties of giving voice to a very real sense of harm and powerlessness.”
— Publishers Weekly (starred review)

Praise for CUT: “McCormick tackles a side of mental illness that is rarely seen in young adult fiction in a believable and sensitive manner.”
— Kirkus Reviews (starred review)

PRAISE FOR MESMERIZED: “A stylish and humorous exploration of the scientific method and the mysteries of the human mind.”
— Publishers Weekly (starred review)

Praise for MESMERIZED: “Awonderful and fun-filled title that introduces yet another facet of a fascinating man.”
— School Library Journal (starred review)

Praise for MESMERIZED: “For history buffs, science enthusiasts, and fans of a good story, this one hits all the marks.”
— Shelf Awareness (starred review)