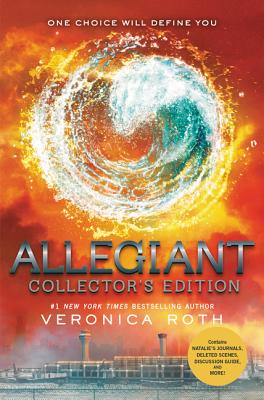 This is book number 3 in the Divergent Series series.

The stunning conclusion to the #1 New York Times bestselling Divergent series of books is now available in a beautifully designed collector's edition. This gorgeous package features 48 pages of bonus content, including:

The Allegiant Collector's Edition is perfect for established fans who want to expand their Divergent library as well as fans of the feature films starring Shailene Woodley, Theo James, and Kate Winslet. The third book in Veronica Roth's worldwide bestselling Divergent trilogy, Allegiant reveals the secrets of the dystopian world that captivated millions of readers in Divergent and Insurgent.

And don't miss The Fates Divide, Veronica Roth's powerful sequel to the bestselling Carve the Mark!

Veronica Roth is the #1 New York Times bestselling author of Divergent, Insurgent, Allegiant, Four: A Divergent Collection, and Carve the Mark. Ms. Roth and her husband live in Chicago. You can visit her online at www.veronicarothbooks.com.

“Roth shakes up her storytelling (and will do the same to some readers) in this highly anticipated, largely satisfying wrap-up to the Divergent trilogy.” — Publishers Weekly

“Roth’s plotting is...intelligent and complex. Dangers, suspicion, and tension lurk around every corner, and the chemistry between Tris and Tobias remains heart-poundingly real. This final installment will capture and hold attention until the divisive final battle has been waged.” — Publishers Weekly

“A surprise ending that is gutsier and much less predictable than the rest of the series would lead one to expect.” — Los Angeles Times

“The plot is believably complex, and Roth makes the wise decision in this last installment to reveal the secrets early on and let the focus fall on her characters as they grapple with this new reality, the choices that face them, and the repercussions of their actions.” — Bulletin of the Center for Children’s Books

“In the end, this is a world replete with loss, and the heroes must suffer their own in a twist that will break the hearts of many readers but stays true to the merciless dystopia that Roth has created.” — Bulletin of the Center for Children’s Books