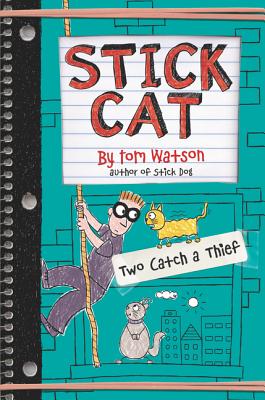 This is book number 3 in the Stick Cat series.

Much to Edith’s delight, she and Stick Cat are enjoying a lazy day at his apartment. But not for long. Soon, strange and threatening sounds come from the ceiling. What could it be? An elephant? Santa?

Stick Cat suspects the man is up to no good, while Edith only hopes the man has snacks. When treasures are stolen from their homes, Stick Cat must come up with a plan to stop the burglar. There’s a thief on the loose. He is big, determined, and sneaky. Will Stick Cat convince a hungry Edith to help him catch the thief?