Let There Be Laughter: A Treasury of Great Jewish Humor and What It All Means (Hardcover) 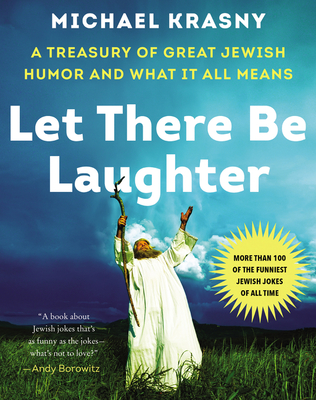 From the host of NPR affiliate’s Forum with Michael Krasny, a compendium of Jewish jokes that packs the punches with hilarious riff after riff and also offers a window into Jewish culture.

Michael Krasny has been telling Jewish jokes since his bar mitzvah, and it’s been said that he knows more of them than anyone on the planet. He certainly states his case in this wise, enlightening, and hilarious book that not only collects the best of Jewish humor passed down from generation to generation, but explains the cultural expressions and anxieties behind the laughs.

"What’s Jewish Alzheimer’s?"
"You forget everything but the grudges."

"You must be so proud. Your daughter is the President of the United States!"
"Yes. But her brother is a doctor!"

"Isn’t Jewish humor masochistic?"
"No. And if I hear that one more time I am going to kill myself."

With his background as a scholar and public-radio host, Krasny delves deeply into the themes, topics, and form of Jewish humor: chauvinism undercut by irony and self-mockery, the fear of losing cultural identity through assimilation, the importance of vocal inflection in joke-telling, and calls to communal memory, including the use of Yiddish.

Borrowing from traditional humor and such Jewish comedy legends as Jackie Mason, Mel Brooks, and Joan Rivers, Larry David, Sarah Silverman, Jerry Seinfeld and Amy Schumer, Let There Be Laughter is an absolute pleasure for the chosen and goyim alike.

Michael Krasny, Ph.D., is a scholar and professor of English and American literature, an award-winning broadcast journalist, and the author of two acclaimed books, Off Mike: A Memoir of Talk Radio and Literary Life and Spiritual Envy: An Agnostic’s Quest. He released a twenty-four-lecture series in two volumes called Masterpieces of Short Fiction for The Teaching Company, which is also available in audio and DVD format. Since 1993 he has been the host of Forum with Michael Krasny, a news and public affairs interview program produced at KQED Radio, the National Public Radio affiliate in San Francisco, California. The program is the most-listened-to locally produced public radio program in the United States, and the number one program in its morning time slot in the San Francisco Bay Area market. Forum can also be heard on SiriusXM, Comcast, iTunes, and across the internet.

“A book about Jewish jokes that’s as funny as the jokes--what’s not to love?” — --Andy Borowitz

“Krasny has chosen well, and digs into the jokes, explaining the sometimes not-so-funny histories and emotions that ultimately trigger the laughter. Besides the featured jokes, he provides plentiful additional bits that evoke smiles and nods of recognition.” — San Francisco Chronicle Book Review

“Be sure to pick up this funny read. You won’t regret it.” — Atlanta Jewish Times

“Let There Be Laughter is as much a memoir as an anthology, and some of the best moments in the book are the anecdotes that Krasny tells about how Jewish humor asserts itself in unexpected, provocative and meaningful ways.” — Jewish Journal

“[Krasny] closes with the hope that his book has brought ‘deep appreciation for the remarkably widely-ranging genius of Jewish comedy.’...delightful.” — New York Times Book Review

“For years, [Krasny’s] been building an arsenal of Jewish jokes, which resulted in the recent bestselling book “Let There Be Laughter,” his punchline-filled reflection on the wit and wisdom and general mishegoss of his people. And, oy, do we need this humor more than ever now.” — David Talbot, San Francisco Chronicle

“Michael Krasny’s ‘Let There Be Laughter’ offers funny jokes and insightful commentary as antidote to trying times.” — Times of Israel