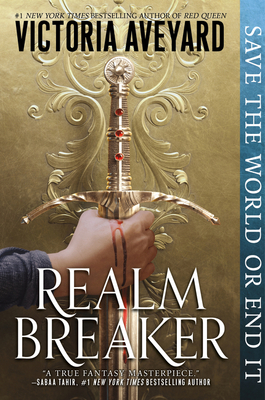 This is book number 1 in the Realm Breaker series.

“A high stakes tale filled with everything you could want in a book: pirates, assassins, knights, magic, and the fate of the realm in the hands of unwilling heroes. Set in an enticing and dangerous land, an unlikely group is thrown together to take on a nigh impossible task so thrilling, I was unable to put this book down.”
— Katie Harveson, Front Street Books, Alpine, TX

Irresistibly action-packed and full of lethal surprises, this paperback edition of the stunning new fantasy series from Victoria Aveyard, #1 New York Times bestselling author of the Red Queen series, features gorgeous, original stepback art of the main characters, and begins where hope is lost—asking the question: When the heroes have fallen, who will take up the sword?

A strange darkness grows in Allward.

Even Corayne an-Amarat can feel it, tucked away in her small town at the edge of the sea.

She soon discovers the truth: She is the last of an ancient lineage—and the last hope to save the world from destruction. But she won’t be alone. Even as darkness falls, she is joined by a band of unlikely companions:

Together they stand against a vicious opponent, invincible and determined to burn all kingdoms to ash, and an army unlike anything the realm has ever witnessed.

Victoria Aveyard was born and raised in East Longmeadow, Massachusetts, a small town known only for the worst traffic rotary in the continental United States. She moved to Los Angeles to earn a BFA in screenwriting at the University of Southern California. She currently splits her time between the East and West coasts. As an author and screenwriter, she uses her career as an excuse to read too many books and watch too many movies. She is the author of the New York Times bestselling Red Queen series, and you can visit her online at www.victoriaaveyard.com.

"The entire time I was reading REALM BREAKER, I wanted one thing: for the book to never end. It is classic yet groundbreaking, romantic yet edgy, a rollicking adventure that carries you along at a relentless pace. A true fantasy masterpiece."  — Sabaa Tahir, #1 New York Times bestselling author of the An Ember in the Ashes series.

"Set in a sprawling world of warring empires and hair-raising magic that any reader would want to get lost in, REALM BREAKER is a fantasy fan's dream, injected with Aveyard's trademark action, heart, and razor-sharp characters." — Roseanne A. Brown, New York Times Bestselling Author of A Song of Wraiths and Ruin

"Realm Breaker is the kind of book you take with you to your favorite reading chair. The world is rich and built with deep care; the characters are complex and flawed; the story is filled with the kind of sweeping scale that fantasy does best. This is a new classic."  — Marie Lu, #1 New York Times bestselling author of Skyhunter

An enthralling adventure, a richly imagined world, and the most impossible odds combine to make Realm Breaker an addictive, tightly-paced gem of a book. Readers will delight in Aveyard’s bewitching new beginning, all at once epic in scope and intimate in detail. It’s the adventure I was desperate to go on as a teenager and the kind of story I eagerly devour as an adult. — Emma Theriault, author of Rebel Rose

“There are a wide variety of action scenes, daring escapes, and betrayals…exquisite descriptions and clashing motivations result in a nuanced, sprawling realm. An epic series opener of old-school high fantasy catering to modern audiences.“ — Kirkus Reviews

Praise for the Red Queen series:     “Aveyard’s “little lightning girl” remains a relatable and deeply flawed heroine... Aveyard adeptly sets the scene for a fourth book to follow, amid a war not yet won.” — Publishers Weekly

“Another devastating cliff-hanger ending will leave readers hungry for the final volume.” — Booklist

“A volatile world with a dynamic heroine.” — Booklist

“[Aveyard] sets her audience up for a gaspworthy twist that reconfigures nearly every character’s role and leaves Mare with no one to trust but herself... This blend of fantasy and dystopia will be an unexpected and worthy addition to many genre fans’ reading list.”

— Bulletin of the Center for Children’s Books

“Fascinating world building... Readers will be intrigued by a world that reflects today’s troubling issues concerning ethnic inequality, unfair distribution of wealth, pollution, warfare, political corruption, and the frightening power of the media.”

“Aveyard certainly has a flair for the dramatic, which teens will eat up. The action hits the ground running and doesn’t stop until after the last page is turned.” — School Library Journal

“Fast-paced and action packed, Glass Sword is compelling and strong, guaranteed to gratify anxious readers of the series and fans of dystopian and fantasy literature.” — Voice of Youth Advocates (VOYA)