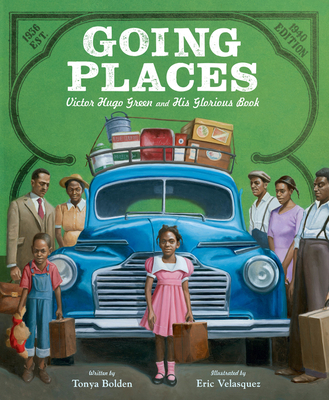 In the vein of Hidden Figures comes a nonfiction picture book about the Green Book, a travel guide by Victor Hugo Green, a Black postal worker from Harlem, made to help African Americans stay safe while traveling during segregation.

As a mail carrier, Victor Hugo Green traveled across New Jersey every day. But with Jim Crow laws enforcing segregation since the late 1800s, traveling as a Black person in the US could be stressful, even dangerous.

So in the 1930s, Victor created a guide—The Negro Motorist Green-Book—compiling information on where to go and what places to avoid so that Black travelers could have a safe and pleasant time. While the Green Book started out small, over the years it became an expansive, invaluable resource for Black people throughout the country—all in the hopes that one day such a guide would no longer be needed.

Award-winning author Tonya Bolden and acclaimed illustrator Eric Velasquez shine a light on this little-known history of Victor Hugo Green and the deep impact of his incredible book on generations of Black families in America.

Tonya Bolden’s books have earned much praise and numerous starred reviews. Her work has been recognized with the NCTE Orbis Pictus Award for Outstanding Nonfiction for Children and the Carter G. Woodson Book Award and listed as a CBC/NCSS Notable Social Studies Trade Book for Young People. She is also the recipient of the Children’s Book Guild of Washington, DC’s Nonfiction Award for her body of work. Her Maritcha: A Nineteenth-Century American Girl was a Coretta Scott King Author Honor book. Visit her website at www.tonyaboldenbooks.com.

Eric Velasquez has illustrated numerous children’s books, including Strong Voices: Fifteen American Speeches Worth Knowing and Schomburg: The Man Who Built a Library by Carole Boston Weatherford. He won the Pura Belpré Award for his illustrations in Grandma’s Gift. He won the John Steptoe New Talent Award for his illustrations in The Piano Man, written by Debbi Chocolate. Visit his website at www.ericvelasquez.com.

“In descriptive text and an upbeat voice, Bolden recalls the Black mail carrier from Harlem who recognized that Black Americans were going places. Velasquez lends a fitting and beautiful scrapbook effect to the story. An effective way to address Jim Crow laws and segregation as well as resourcefulness and determination." — Booklist (starred review)

"Bolden has perfectly combined the painful story of Jim Crow and segregation with the strength and determination of Black Americans to live a full life. The illustrations pull readers along on this American experience known too well to some and a revelation for others. A highly recommended addition to any collection." — School Library Journal (starred review)

"With lively language that hovers between poetry and prose, Bolden’s biographical account carefully introduces the intersections of historical preconditions that led to the creation of Green Book and Green’s disposition and resilience. Velasquez’s smooth oil paint illustrations radiantly depict everyday Black folks on the go."  — Bulletin of the Center for Children’s Books (starred review)