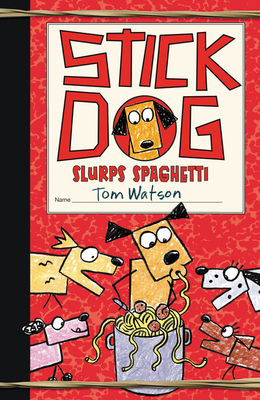 This is book number 6 in the Stick Cat series.

Perfect for fans of Big Nate, Diary of a Wimpy Kid, Timmy Failure, and the previous Stick Dog books, Tom Watson’s hilarious Stick Dog Slurps Spaghetti will be gobbled up even by reluctant readers.

Stick Dog and his gang of hungry hounds want to play tug-of-war. Their search for rope leads to something even better—spaghetti! Once they get a taste, they must get some more.

It will be their most difficult mission ever—and will demand all of Stick Dog’s problem-solving skills. They’ll need to scale the tallest mountain in the suburbs and sneak into a restaurant filled with people.

Dangerous humans—a strange-talking girl, a huge chef, and a penguin-man—lurk around every corner. But there’s more than danger in the air. Stick Dog has caught the scent of something even more scrumptious than spaghetti. And he’ll risk everything to find out what it is.