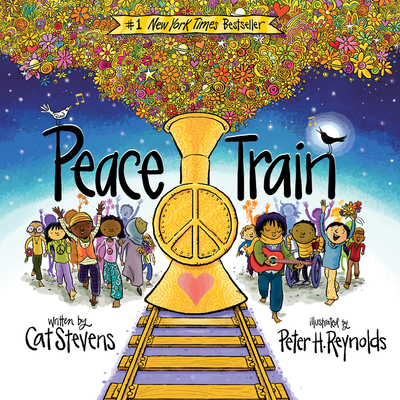 Hop aboard the Peace Train in this picture book adaptation of Cat Stevens’s legendary anthem of unity and harmony in time for the song’s 50th anniversary! With illustrations by New York Times bestselling illustrator Peter H. Reynolds.

Thinking about the good things to come

And I believe it could be

Something good has begun

Dreaming about the world as one

And I believe it could be

Someday it's going to come”

Readers are invited to hop on the PEACE TRAIN and join its growing group of passengers who are all ready to unite the world in peace and harmony.

Cat Stevens is one of the most influential Rock and Roll Hall of Fame, Songwriters Hall of Fame, and Grammy-nominated singer-songwriters of all time. His career spans over six decades, and he is known worldwide for his hits “Peace Train,” “If You Want to Sing Out, Sing Out,” “Wild World,” “Father and Son,” “The First Cut Is the Deepest,” and many more. In 2003, he was honored with the World Social Award for “humanitarian relief work helping children and victims of war.” The World Summit of Nobel Peace Laureates recognized him with the Man of Peace award for his charity work and philanthropy in 2004. In 2020, he launched the Peace Train initiative, which delivers relief, medical aid, and education globally. www.catstevens.com

Peter H. Reynolds is the award-winning author and illustrator of The North Star, The Dot, and Ish. He also illustrated the bestselling Someday by Alison McGhee, Tess's Tree by Jess M. Brallier, and the bestselling Judy Moody series by Megan McDonald. Peter is the founder and CEO of FableVision, an educational company that produces animated films, books, and software. He lives in Dedham, Massachusetts.

Unlike many of the songs that have become picture book texts, this one builds up a real head of steam for world peace, and captures the childlike optimism of the original song for a new generation. — School Library Journal (starred review)

Climb aboard, with this visual interpretation of the classic 1971 song.  — Kirkus Reviews