Big Nate: Twice the 'Tude: Big Nate Flips Out and Big Nate: In the Zone (Paperback) 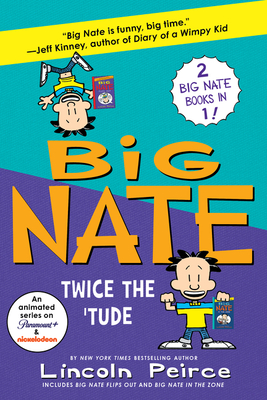 A paperback bind-up of the fifth and sixth novels in the New York Times bestselling Big Nate series: Big Nate Flips Out and Big Nate: In the Zone.

In Big Nate Flips Out, everyone knows N-A-T-E does NOT equal N-E-A-T! And when Nate’s sloppiness gets out of hand, Francis is in serious trouble. Can Nate clean up his act, or will he flip out first?

In Big Nate: In the Zone, Nate’s luck can’t get any worse . . . until everything changes. All of a sudden, he can do no wrong! But why? And how long will it last?

For fans of the hilarious Diary of a Wimpy Kid series: Get ready for more Big Nate, infamous troublemaker and definitely NOT the teacher’s pet.

Lincoln Peirce (pronounced "purse") is a cartoonist/writer and New York Times bestselling author of the hilarious Big Nate book series (www.bignatebooks.com), now published in twenty-five countries worldwide and available as ebooks and audiobooks and as an app, Big Nate: Comix by U! He is also the creator of the comic strip Big Nate. It appears in over three hundred U.S. newspapers and online daily at www.gocomics.com/bignate. Lincoln's boyhood idol was Charles Schulz of Peanuts fame, but his main inspiration for Big Nate has always been his own experience as a sixth grader. Just like Nate, Lincoln loves comics, ice hockey, and Cheez Doodles (and dislikes cats, figure skating, and egg salad). His Big Nate books have been featured on Good Morning America and in the Boston Globe, the Los Angeles Times, USA Today, and the Washington Post. He has also written for Cartoon Network and Nickelodeon. Lincoln lives with his wife and two children in Portland, Maine.