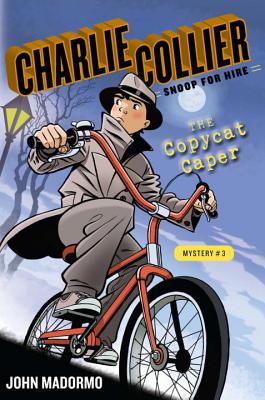 The third inacontemporary series just likeEncyclopedia Brown, but with a little more brawn, and a lot more brainteasers

Super-sleuth Charlie Collier is thinking about taking a hiatus from his detective agency to play a private eye in a school play but when some real robberies stump the police, Charlie realizes that detective work really is his true calling.
He and his sidekicks Henry and Scarlett team up with Charlie's grandma and her old buddy Eugene to set a trap for the robber one they re sure will catch him. But the trap doesn t work out quite the way they thought it would, leaving Charlie, Henry and Scarlett in grave danger.
This high-stakes adventure is filled to the brim with brainteasers. Charlie can solve them all can you?
What people are saying about Charlie Collier's first caper:
I loved reading The Homemade Stuffing Caper. The mystery is challenging. The many characters in the book are great fun. I look forward to reading the next Charlie Collier story, and the next, and the next, and the... David A. Adler, author of the Cam Jansen mysteries
The Homemade Stuffing Caper is an exciting mystery, full of jokes and puns, as well as brainteasers and lots of detective work. This may be the first mystery you don t want the detective to solve, because you won t want it to end Bookpage
Brisk and absorbing, author John Madormo's debut tips its fedora to hard-boiled classics with its sixth-grader meets Sam Spade narration. FamilyFun Magazine
With mysteries to solve, codes to decrypt, and an extended cast of colorful characters in tow, this first in a new series offers lots of mystery fans to chew on and will leave them hungry for the next installment. Booklist
A Bookpage Top Ten Summer Reading Selection for 2012

John V. Madormo is a college professor and a screenwriter and he s good at brain teasers, just like Charlie Collier.He lives near Chicago, in Naperville, IL.www.charliecolliersnoopforhire.com"