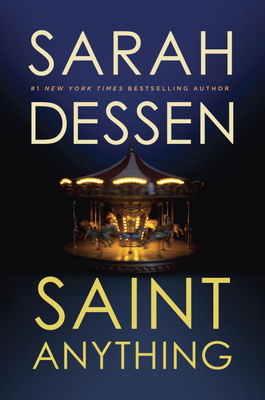 "Saint Anything is a poignant, honest story about how we might suffer the misfortune of someone else's bad choices, how people who love us can become family when we desperately need it, and how starting over might - miraculously - mean taking a solid leap forward." —Jodi Picoult, New York Times bestselling novelist of Leaving Time and My Sister’s Keeper

Sydney has always felt invisible. She's grown accustomed to her brother, Peyton, being the focus of the family’s attention and, lately, concern. Peyton is handsome and charismatic, but seems bent on self-destruction. Now, after a drunk-driving accident that crippled a boy, Peyton’s serving some serious jail time, and Sydney is on her own, questioning her place in the family and the world.

Then she meets the Chatham family. Drawn into their warm, chaotic circle, Sydney experiences unquestioning acceptance for the first time. There’s effervescent Layla, who constantly falls for the wrong guy, Rosie, who’s had her own fall from grace, and Mrs. Chatham, who even though ailing is the heart of the family. But it’s with older brother Mac—quiet, watchful, and protective—that Sydney finally feels seen, really seen, at last.

Saint Anything is Sarah Dessen’s deepest and most psychologically probing novel yet, telling an engrossing story of a girl discovering friendship, love, and herself.

Sarah Dessen is the author of thirteen novels, which include the New York Times bestsellers The Moon and More, What Happened to Goodbye, Along for the Ride, Lock and Key, Just Listen, The Truth About Forever, and This Lullaby. Her first two books, That Summer and Someone Like You, were made into the movie How to Deal.

Dessen’s books are frequently chosen for the Teens’ Top Ten list and the list of Best Fiction for Young Adults. They have been translated into twenty-five languages. Sarah Dessen is the recipient of the 2017 Margaret A. Edwards Award from the Young Adult division of the American Library Association.

Sarah Dessen graduated from the University of North Carolina at Chapel Hill with highest honors in creative writing. She lives in North Carolina with her family.

Praise for Saint Anything:

"Saint Anything is a poignant, honest story about how we might suffer the misfortune of someone else's bad choices, how people who love us can become family when we desperately need it, and how starting over might - miraculously - mean taking a solid leap forward.  Is there anyone who can write about what matters most to teens as well as Dessen can?  I sincerely doubt it." —Jodi Picoult, New York Times bestselling novelist of Leaving Time and My Sister’s Keeper

"The novel’s strengths — how it unpacks the perplexities of guilt, friendships, and family dynamics — are what readers will remember." —Boston Globe

* "Dessen delves deeper than ever into the complex dynamics of families suffering loss and confronting changes that upend everything. Once again, Dessen demonstrates her tremendous skill in evoking powerful emotions through careful, quiet prose, while delivering a satisfying romance. The author’s many devotees are sure to enjoy this weighty addition to her canon." —Publishers Weekly, starred review

"Taut, tightly structured with well-rounded characters, this novel is sure to please Dessen’s many fans and attract new ones." —School Library Journal

"A rich emotional landscape . . . A many-layered story told with a light touch." —Kirkus

"Another incisive and sensitive character-driven story sure to please her many, many fans." —Booklist

"Sarah Dessen is the patron saint of realistic romance. . . we think Saint Anything might be one of her best ever." —Justine Magazine

"In Saint Anything, Dessen gives readers a sensitive and touching look at how loss can affect a family and the importance of finding those who support you, no matter what." —Bookish

"Saint Anything may seem like a quiet read at first, but remember what is said about still waters. What begins as a somber story, carefully narrated by a polite young woman, builds to a gripping and unexpected climax and a satisfying conclusion." —NY Journal of Books

"Clearly any new release from the queen of YA romance is going to be huge. But Saint Anything is exciting in its own right, focusing on the complicated bonds of family, particularly in the wake of tragedy and misfortune." —Bustle

"We love anything Sarah Dessen pens. . . [Saint Anything] explores how sometimes starting over is the best way to move forward." —Glitter Magazine

"Dessen is a superstar of young adult literature, and Saint Anything (about finding friendship and finding yourself) has delighted (and added to) her legions of fans." —News & Observer

"Dessen’s characters are so vividly created—their actions and emotions so genuinely authentic—that it almost seems that Dessen has a psychological advantage in understanding our human condition." —Heroes & Heartbreakers

"Sarah Dessen is something of a rock star in young adult fiction. Her bestselling coming-of-age novels are warmly written explorations of teens in transition that are, by turns, questioning, humorous and hopeful." —Los Angeles Times

"Dessen is as skilled as ever at turning out steady, satisfying stories about teens that are easy to fall for." —Publishers Weekly, starred review for The Moon and More

"Readers can count of Dessen; she's a pro at creating characters caught at a nexus of change, who have broken relationships and who need to make decisions. . . Readers will enjoy every minute they spend with her." —Kirkus Reviews on What Happened to Goodbye

"Realistic teen dialogue, authentic girl friendships, and a complex underlying question: Can people really change?" —Kirkus Reviews on Along for the Ride

"The romance which forms the core of the story is everything a romance should be." —Horn Book on Just Listen