Wrath of the Storm (Mark of the Thief #3) (Hardcover) 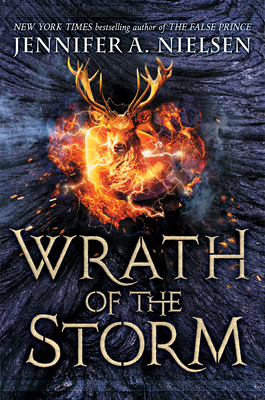 Trouble has a way of seeking out Nicolas Calva, and it's not likely to leave him alone any time soon. With Caesar's magic bulla, the Malice of Mars, and the possibility of a Jupiter Stone in play, all the powers of Rome are circling Nic. He'll have to maneuver his way through scheming government officials and reawakened magical beasts to save the Empire. Can he manage to keep his friends and family safe, claim his own freedom once and for all, and rescue the Empire -- before the magic gets the better of him?

With twists and turns on every page, critically acclaimed author Jennifer Nielsen weaves an epic, action-packed conclusion to her extraordinary Mark of the Thief trilogy.

Jennifer A. Nielsen is the acclaimed author of the New York Times and USA Today bestselling Ascendance Trilogy: The False Prince, The Runaway King, and The Shadow Throne. She also wrote the New York Times bestselling Mark of the Thief trilogy: Mark of the Thief, Rise of the Wolf, and Wrath of the Storm; the standalone fantasy The Scourge; the historical thriller A Night Divided; and Book Six of the Infinity Ring series, Behind Enemy Lines. Jennifer lives in northern Utah with her husband, their three children, and a perpetually muddy dog.

Praise for Mark of the Thief:

Praise for Rise of the Wolf:

"The novel's Roman mythology connections... will have great appeal for fans of Rick Riordan. Heavily plot-driven with a movie-script feel..." -- Booklist


Praise for The False Prince:

"A page-turner." -- The New York Times Book Review
"Sage proves to be a compelling character whose sharp mind and shrewd self-possession will make readers eager to follow him into a sequel." -- The Wall Street Journal
"A swashbuckling origin story... chock-full of alluring details for adventure-loving boys." -- Los Angeles Times
*"An impressive, promising story." -- Publishers Weekly, starred review
"A fast-paced and thrilling read with twists and turns that never let up." -- School Library Journal
"Gripping." -- Kirkus Reviews
"Should appeal to fans of . . . Suzanne Collins. . . . A sure-fire mix of adventure, mystery, and suspense." -- The Horn Book