7 Good Reasons Not to Grow Up (Paperback) 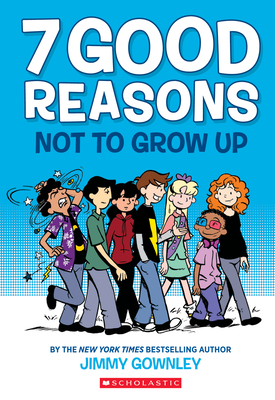 The kids at prestigious Greycliff Academy are in for a surprise when their hero, Kirby Finn, turns out to be something he's not.
To the students at exclusive Greycliff Academy, Kirby seems to have it all: charm, brains, and a lucky streak that won't quit. He's also the notorious mastermind behind the snarky videos, "7 Good Reasons Not to Grow Up," which expose how being an adult isn't all it's cracked up to be. Why would any kid want to become one of them?

But there's also a mystery about Kirby. And when his best friend, Raja, finds out that Kirby isn't the person he's pretending to be, Kirby, Raja, and their friends may be forced to grow up sooner than they think and face the world head-on.

Jimmy Gownley is an award-winning comics author who began writing and drawing comics at age 15. His acclaimed series, Amelia Rules!, was launched in 2001 to a flurry of rave reviews. He has been nominated for multiple Eisner awards and his most recent book, The Dumbest Idea Ever!, won the Children’s Choice Award. He cofounded the organization Kids Love Comics, which works to promote comic books and graphic novels as a valuable tool for literacy. Jimmy lives in Harrisburg, Pennsylvania.

Praise for The Dumbest Idea Ever!:

* "Gownley's story is wonderful; his small-town life is so vividly evinced it's difficult to not get lost in it." -- Kirkus Reviews, starred review

"A deeply personal and genuine work of autobiography, and an open letter of assurance to aspiring artists everywhere." -- Publishers Weekly

"An excellent example of autobiographical sequential art at its most deeply felt." -- Booklist

"This charming and inspiring tale will be enjoyed by fans of Raina Telgemeier's Smile (Scholastic, 2010) and aspiring comics creators everywhere." -- School Library Journal