The Only Thing to Fear (Paperback) 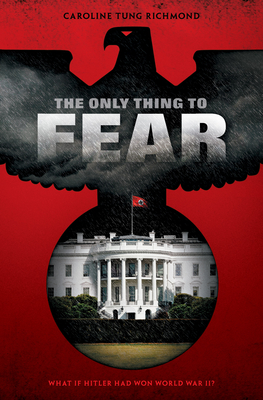 By Caroline Tung Richmond
$10.99
On Our Shelves Now

In a stunning reimagining of history, debut author Caroline Tung Richmond weaves an incredible story of secrets and honor in a world where Hitler won World War II.
It's been nearly 80 years since the Allies lost WWII in a crushing defeat against Hitler's genetically engineered super soldiers. America has been carved up by the victors, and 16-year-old Zara lives a life of oppression in the Eastern America Territories. Under the iron rule of the Nazis, the government strives to maintain a master race, controlling everything from jobs to genetics. Despite her mixed heritage and hopeless social standing, Zara dreams of the free America she's only read about in banned books. A revolution is growing, and a rogue rebel group is plotting a deadly coup. Zara might hold the key to taking down the Führer for good, but it also might be the very thing that destroys her. Because what she has to offer the rebels is something she's spent her entire life hiding, under threat of immediate execution by the Nazis.
In this action-packed, heart-stopping novel of a terrifying reality that could have been, Zara must decide just how far she'll go for freedom.

Caroline Tung Richmond is the author of the alternative history duology The Only Thing to Fear and Live in Infamy, as well as the historical fiction novel The Darkest Hour. She’s also the program director of We Need Diverse Books, a nonprofit that seeks to create a world where all children can find themselves on the pages of a book.

A self-proclaimed history nerd and cookie connoisseur, Caroline lives in Maryland with her family and her dog, Otto von Bismarck—named for the German chancellor (naturally). You can find out more about at her at carolinetrichmond.com.

Praise for The Only Thing to Fear
"Richmond makes an impressive debut with this alternate history . . . She twists history and throws in creative exploitation of superpowers to deliver a fast-paced adventure." --Publishers Weekly

"Reminiscent of series like The Hunger Game and Divergent, but the alternative-history angle adds a spark of its own." --Booklist

"An outstanding debut that will thrill readers of all ages."--SciFiPulse.net

"The Only Thing to Fear can be summed up in two words: realistically frightening . . . This heart-stopping novel goes to the extremes of what could have been and what may have been done." --TeenReads.com

"The plot is fast-paced and will appeal to both historical fiction and science fiction readers." --Library Media Connection