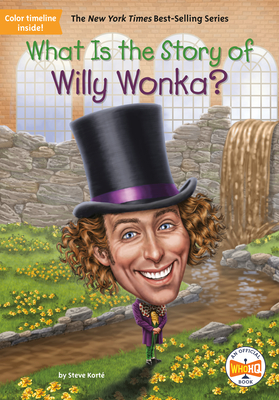 #1 New York Times bestselling Who HQ series brings you the stories behind the most beloved characters of our time.

Grab your golden ticket and learn how Willy Wonka became an internationally popular figure in literature and film.

The whimsical, wacky, and wondrous character of Willy Wonka made his first appearance in Roald Dahl's 1964 children's novel Charlie and the Chocolate Factory. When the fictional factory owner opened up the doors of his company, readers were welcomed into his world of pure imagination...and chocolate! Wonka went on to dazzle a whole new set of fans in the 1971 film that brought Dahl's characters to life. Since then, there have been other movie adaptations, books, musicals, and even theme park rides that bring the world just a little bit closer to this fantastic chocolatier. Learn about the legacy of Wonka in this new book from the #1 New York Times bestselling series.

Steve Korté is a former editor for DC Comics. He is now a freelance writer and has written books for DC Comics and Warner Bros. He lives in New York City.