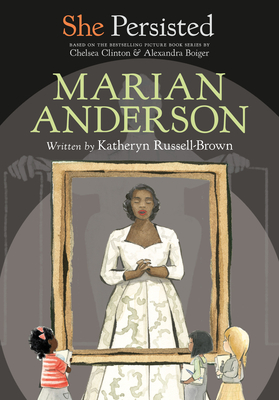 Inspired by the #1 New York Times bestseller She Persisted by Chelsea Clinton and Alexandra Boiger, a chapter book series about women who spoke up and rose up against the odds--including Marian Anderson!

When renowned classical singer Marian Anderson wasn't allowed to sing at a theater in Washington, DC, because she was Black, First Lady Eleanor Roosevelt invited her to sing at the Lincoln Memorial, at a concert attended by thousands of people. Marian went on to sing around the world on behalf of the UN and the US State Department, and as a part of the Civil Rights Movement, she also performed at the March on Washington. She went on to win many awards, including the first ever Presidential Medal of Freedom and a Grammy Lifetime Achievement Award--and she inspired countless people along the way.

In this chapter book biography by award-winning author Katheryn Russell-Brown, readers learn about the amazing life of Marian Anderson--and how she persisted.

Complete with an introduction from Chelsea Clinton, black-and-white illustrations throughout, and a list of ways that readers can follow in Marian Anderson's footsteps and make a difference! A perfect choice for kids who love learning and teachers who want to bring inspiring women into their curriculum.

And don’t miss out on the rest of the books in the She Persisted series, featuring so many more women who persisted, including Coretta Scott King, Harriet Tubman, Ruby Bridges, and more!

Katheryn Russell-Brown (krbrown.net) is a professor of law and the director of the Center for Race and Race Relations at the University of Florida. She grew up in a family of music lovers, where jazz was an integral part of the sounds of daily life. A radio broadcast in 2008 about Liston inspired Russell-Brown to research the musician and eventually to write Little Melba and Her Big Trombone, her first picture book. She is also the author of A Voice Named Aretha and She Was the First! Russell-Brown lives in Gainesville, Florida, with her family. You can follow her on Twitter @krussellbrown.

Chelsea Clinton is the #1 New York Times bestselling author of She Persisted, She Persisted Around the World, She Persisted in Sports, She Persisted in Science, Don't Let Them Disappear, It's Your World and Start Now!, as well as Grandma's Gardens and The Book of Gutsy Women, which she wrote with Hillary Clinton, and Governing Global Health with Devi Sridhar. Chelsea earned a master’s degree in public health from Columbia University’s Mailman School of Public Health, where she is now an adjunct assistant professor, and a PhD in international relations from Oxford University. She is also the Vice Chair of the Clinton Foundation, where she works on many initiatives, including those that help empower the next generation of leaders. She lives in New York City with her husband, Marc, their three children and their dog, Soren.

Gillian Flint (gillianflint.com) is an illustrator who has a passion for painting in watercolors. She has been drawing and creating characters for as long as she can remember. Her work has been published in the USA, the UK and Australia. In her spare time she enjoys reading and gardening at her home in the UK. You can follow her on Instagram @gillianflint_illustration.

Alexandra Boiger (alexandraboiger.com) has illustrated nearly twenty picture books, including the She Persisted series by by Chelsea Clinton; the popular Tallulah series by Marilyn Singer; and the Max and Marla books, which she also wrote. Originally from Munich, Germany, she now lives outside of San Francisco, California, with her husband, Andrea; daughter, Vanessa; and two cats, Luiso and Winter. You can follow Alexandra on Instagram @alexandra_boiger.

Praise for She Persisted: Marian Anderson:

"This biography showcases the life of an extremely talented American, while realistically addressing the discrimination she faced during her lifetime. A solid addition to any collection." –School Library Journal