I am Superman (Stories Change the World) (Hardcover) 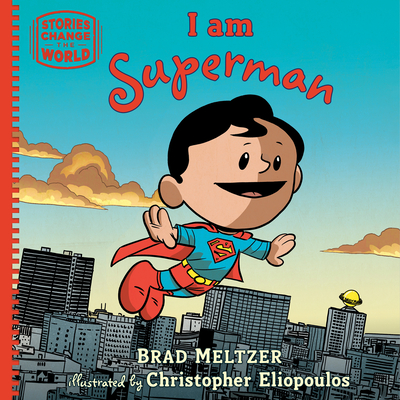 This fictional biography of Superman launches the exciting start of the Stories Change the World series from Brad Meltzer and Chris Eliopoulos, the team behind the New York Times bestselling Ordinary People Change the World books

For almost 80 years, the story of Clark Kent has been told by thousands of creators and this picture book biography is the perfect way to introduce the young readers to this legendary superhero. From his beginnings on his birth planet Krypton to his childhood on Earth, I am Superman focuses on the ways Clark Kent was super because of his actions, not just his powers.

The Stories Change the World series retells beloved, iconic fictional tales of heroism, providing a lively and fun first version of the myth and why it's inspirational, and serving as a fantastic stepping stone to get young readers interested in nonfiction biographies.

Included in each book are:

• A timeline of key moments in the story's history
• Images of important film, TV, and cartoon versions of the story
• Comic-book-style illustrations that are in the superhero's life story
• Childhood moments that influenced the hero
• Facts that make great conversation-starters
• A character trait that makes the character heroic and that readers can aspire to

You’ll want to collect each book in this dynamic series!

Brad Meltzer is the New York Times bestselling author of Heroes for My Son, Heroes for My Daughter, The Lincoln Conspiracy, and a number of suspense novels like The Lightning Rod. He also helped find the missing 9/11 flag with his is History Channel television show Brad Meltzer's Lost History. He lives in Florida with his wife and their three children.


Christopher Eliopoulos began his illustration career at Marvel Comics, and has worked on thousands of comics, including the graphic novels Cosmic Commandos and Monster Mayhem. He is the author/illustrator of the picture books The Yawns Are Coming! and The Giggles Are Coming! He lives in New Jersey with his wife and their identical twin sons (when the boys are home from college).