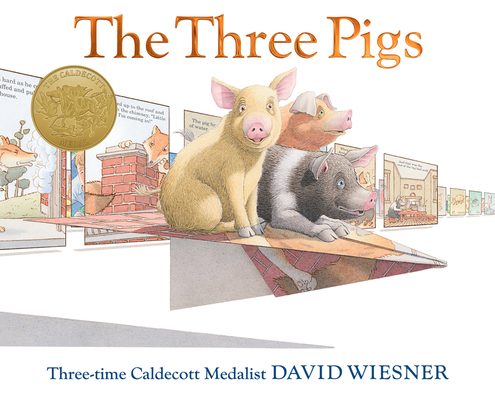 "Clever, whimsical and sophisticated.” —New York Times Book Review
Taking visual narrative to a new level, this picture book from the creator of Tuesday and Flotsam begins a seemingly familiar tale of three pigs preparing to build houses of straw, sticks, and bricks. But when the Big Bad Wolf comes looking for a snack, he huffs and puffs the first little pig right out of the story . . . and into the realm of pure imagination! Dialogue balloons pepper a wide variety of illustration styles taking readers through a dazzling fantasy universe to the surprising and happy ending. You will never look at “The Three Little Pigs”—or artwork—the same way again!
"A funny, wildly imaginative tale that encourages readers to leap beyond the familiar; to think critically about conventional stories and illustration, and perhaps, to flex their imaginations and create wonderfully subversive versions of their own stories." — ALA Booklist, Starred Review

David Wiesner is internationally renowned for his visual storytelling and has won the Caldecott Medal three times—for Tuesday, The Three Pigs, and Flotsam—the second person in history to do so. He is also the recipient of three Caldecott Honors, for Free Fall, Sector 7, and Mr. Wuffles. He lives near Philadelphia with his family. david-wiesner.harpercollins.com

Wiesner has created a funny, wildly imaginative tale that encourages readers to leap beyond the familiar; to think critically about conventional stories and illustration, and perhaps, to flex their imaginations and create wonderfully subversive versions of their own stories. Booklist, ALA, Starred Review   "Children will delight in the changing perspectives...and the whole notion of the interrupted narrative...fresh and funny...Witty dialogue and physical comedy abound in this inspired retelling of a familiar favorite. School Library Journal, Starred   As readers have come to expect from the inventive works of Wiesner, nothing is ever quite as it seems in his picture books. This version of the pigs' tale starts off traditionally enough —warm, inviting watercolor panels show in succession the tiny houses, their owner-builders and their toothy visitor. But when the wolf begins to huff and puff, he blows the pigs right out of the illustrations. Though Wiesner briefly touched on this theme in his Free Fall (fans may note a strong resemblance between the dragon in that volume and the one featured in these pages), he takes the idea of 3-D characters operating independently of their storybooks to a new level here. The three pigs land in the margins, which open out onto a postmodern landscape hung with reams of pages made for climbing on, crawling under and folding up for paper airplane travel. Together the pigs visit a book of nursery rhymes and save the aforementioned dragon from death at the hands of the knight. When they get the dragon home, he returns their kindness by scaring the wolf off permanently.  Even the book's younger readers will understand the distinctive visual code. As the pigs enter the confines of a storybook page, they conform to that book's illustrative style, appearing as nursery-rhyme friezes or comic-book line drawings. When the pigs emerge from the storybook pages into the meta-landscape they appear photographically clear and crisp, with shadows and three dimensions. Wiesner's (Tuesday) brilliant use of white space and perspective (as the pigs fly to the upper right-hand corner of a spread on their makeshift plane, or as one pig's snout dominates a full page) evokes a feeling that the characters can navigate endless possibilities —and that the range of story itself is limitless. Publishers Weekly, Starred   With this inventive retelling, Caldecott Medalist Wiesner (Tuesday, 1991) plays with literary conventions in a manner not seen since Scieszka's The Stinky Cheese Man and Other Fairly Stupid Tales (1993). The story begins with a traditional approach in both language and illustrations, but when the wolf huffs and puffs, he not only blows down the pigs' wood and straw houses, but also blows the pigs right out of the story and into a parallel story structure. The three pigs (illustrated in their new world in a more three-dimensional style and with speech balloons) take off on a postmodern adventure via a paper airplane folded from the discarded pages of the traditional tale. They sail through several spreads of white space and crash-land in a surreal world of picture-book pages, where they befriend the cat from "Hey Diddle Diddle" and a charming dragon that needs to escape with his cherished golden rose from a pursuing prince. The pigs, car and dragon pick up the pages of the original story and return to that flat, conventional world, concluding with a satisfying bowl of dragon-breath-broiled soup in their safe, sturdy brick house. The pigs have braved the new world and returned with their treasure: the cat for company and fiddle music, the dragon's golden rose for beauty, and the dragon himself for warmth and protection from the wolf, who is glimpsed through the window, sitting powerlessly in the distance. On the last few pages, the final words of t —