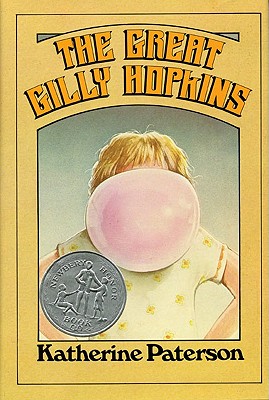 By Katherine Paterson
$16.99
On Our Shelves Now

Eleven-year-old Gilly has been stuck in more foster families than she can remember, and she's hated them all. She has a reputation for being brash, brilliant, and completely unmanageable, and that's the way she likes it. So when she's sent to live with the Trotters—by far the strangest family yet—she knows it's only a temporary problem.

Gilly decides to put her sharp mind to work and get out of there fast. She's determined to no longer be a foster kid. Before long she's devised an elaborate scheme to get her real mother to come rescue her. Unfortunately, the plan doesn't work out quite as she hoped it would...

The joys and struggles of adoption, told in a real and accessible way, are beautifully expressed in Katherine Paterson's The Great Gilly Hopkins. Don't miss it!

Katherine Paterson is one of the world’s most celebrated and beloved authors. Among her many awards are two Newberys and two National Book Awards, and she was recently named a "Living Legend” by the Library of Congress. She has been published in more than 22 languages in a variety of formats, from picture books to historical novels.

“This fabulous book will give you rich discussions about her anger and how in that anger, she reacts without thinking.” 15 Banned Books Every Tween and Teen Should Read
— Brightly

“The arrogant, bitter heroine of this moving story is a wisecracking, gum-chewing kid who has been shuttled from one foster home to another. . . . [She is portrayed] with warmth and wit, in a story filled with love and compassion.”
— Children's Book Review Service