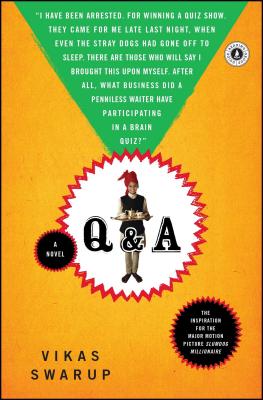 Vikas Swarup's spectacular debut, which provided the inspiration for the award-winning film Slumdog Millionaire, is a page-turning and beguiling story of love, perseverance, and drama. Vikas Swarup's remarkable debut novel opens in a jail cell in Mumbai, India, where Ram Mohammad Thomas is being held after correctly answering all twelve questions on India's biggest quiz show, Who Will Win a Billion? It is hard to believe that a poor orphan who has never read a newspaper or gone to school could win such a contest. But through a series of exhilarating tales Ram explains to his lawyer how episodes in his life gave him the answer to each question. Ram takes us on an amazing review of his own history--from the day he was found as a baby in the clothes donation box of a Delhi church to his employment by a faded Bollywood star to his adventure with a security-crazed Australian army colonel to his career as an overly creative tour guide at the Taj Mahal. Swarup's Q & A is a charming blend of high comedy, drama, and romance that reveals how we know what we know--not just about trivia, but about life itself. Cutting across humanity in all its squalor and glory, Vikas Swarup presents a kaleidoscopic vision of the struggle between good and evil--and what happens when one boy has no other choice in life but to survive.

"It was an inspired idea by Vikas Swarup to write Q & A...A broad and sympathetic humanity underpins the whole book."

"Vikas Swarup weaves a delightful yarn. With an easy style, Q & A is sweet, sorrowful and funny. An enchanting tale."

"This page-turning novel reels from farce to melodrama to fairy tale."

"Swarup is an accomplished storyteller, and Q & A has all the immediacy and impact of an oral account."

"[A] rare, seemingly effortless brew of humour, drama, romance and social realism...Swarup...has achieved a triumph with this thrilling, endearing work which gets into the heart and soul of modern India."

"Q & A is that rare novel that chugs along on the parallel tracks of being a rollicking read as well as being a polished, varnished, finished work of impressive craftsmanship."