She Shoots, She Scores!: A Celebration of Women's Soccer (Paperback) 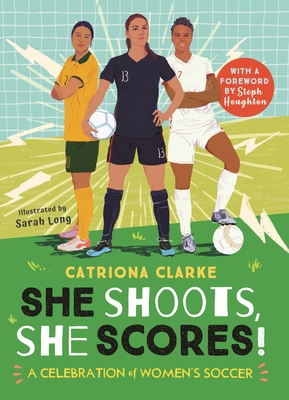 With a foreword by England captain Steph Houghton, She Shoots, She Scores! tells the incredible story of the BEST sport in the world, women’s soccer—from the men who tried to ban it to the superstars of today’s game, including Alex Morgan and Megan Rapinoe. Read on to find out about . . .

– The girl who had to play soccer in secret but grew up to become a goal-scoring legend
– The 13-year-old who shot to international fame but didn’t get a mention in the school assembly
– The greatest women’s soccer player ever, who scored in FIVE World Cups

Written by acclaimed YA novelist Catriona Clarke, the book is packed with facts and stats about the FIFA Women's World Cup and the Olympics, plus pocket profiles of the world's top players—from Marta to Wendie Renard—and record-breaking teams, including the U.S. Women's National Team and Olympique Lyonnais. What's more, discover the key skills you'll need to become a great goalkeeper, a tough-tackling defender, or the world's next superstar striker!