Knight: A Chronicle of the Sibyl's War (Hardcover) 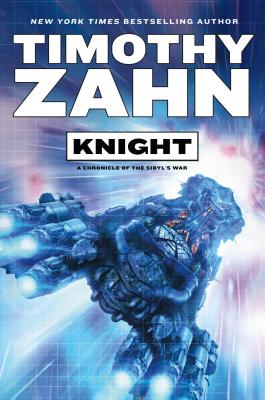 A legend of Space Opera is back with Knight, the second book in Timothy Zahn's Sibyl’s War series

Nicole Hammond was just trying to survive on the streets of Philadelphia, then she and her partner Bungie were abducted by a race of mysterious moth-like aliens and taken to a strange ship called the Fyrantha.

Now she is a Sibyl, a special human that has the ability to communicate with the aliens and their ship, and no one is happy. Competing factions control different parts of the Fyrantha with the humans and other sentient aliens caught in the middle. But Nicole is done being bullied, and now she has a plan to take control of the ship. She just has to outsmart war profiteers and slavers to do it.

Timothy Zahn is the author of more than forty science fiction novels. He has also written many short stories, as well as Cascade Point, which won the Hugo Award for best novella. His other works include the Dragonback series, of which Dragon and Thief was an ALA Best Book for Young Adults, and the bestselling Star Wars™ novel, Heir to the Empire. Zahn lives in Oregon.

“One of the first new writers to rivet my attention so thoroughly I almost missed my train. Since then he's grown impressively, and remains one of science fiction's best practitioners of solid imagining and storytelling.”—Stanley Schmidt, Analog

“Tim Zahn is a master of tactics and puts his own edge on complex hard-SF thrillers. His original work is sure to please his legions of Star Wars fans.”—Kevin J. Anderson, New York Times bestselling author

"An inventive plot…Zahn's strength is hard science fiction, and he excels at technical description. The comic-book-like nonstop action will attract fans of the genre." —RT Book Reviews on Night Train to Rigel