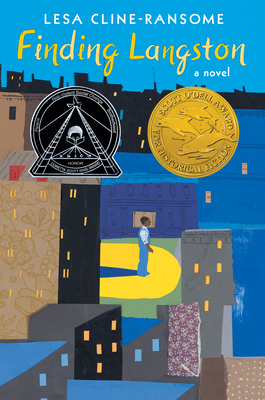 “In this story of the Great Migration of 1946, 11-year-old Langston misses his mother who has passed away, his grandmother who was left behind and his father who has to work long hours. As Langston faces poverty and bullying in Chicago, he takes refuge in the library and discovers books and companionship, something that is life-affirming for both him and his father. Finding Langston is exactly the profound book of renewal we need right now.”
— Alice Hutchinson, Byrd's Books, Bethel, CT

When eleven-year-old Langston's father moves them from their home in Alabama to Chicago's Bronzeville district, it feels like he's giving up everything he loves.

It's 1946. Langston's mother has just died, and now they're leaving the rest of his family and friends. He misses everything--Grandma's Sunday suppers, the red dirt roads, and the magnolia trees his mother loved.

In the city, they live in a small apartment surrounded by noise and chaos. It doesn't feel like a new start, or a better life. At home he's lonely, his father always busy at work; at school he's bullied for being a country boy.
But Langston's new home has one fantastic thing. Unlike the whites-only library in Alabama, the Chicago Public Library welcomes everyone. There, hiding out after school, Langston discovers another Langston--a poet whom he learns inspired his mother enough to name her only son after him.

Lesa Cline-Ransome, author of the Coretta Scott King Honor picture book Before She Was Harriet, has crafted a lyrical debut novel about one boy's experiences during the Great Migration. Includes an author's note about the historical context and her research.

Don't miss the companion novel, Leaving Lymon, which centers on one of Langston's classmates and explores grief, resilience, and the circumstances that can drive a boy to become a bully-- and offer a chance at redemption.

Lesa Cline-Ransome is the author of more than twenty books for young readers including the award-winning Finding Langston trilogy. Her work has received a plethora of honors, including dozens of starred reviews, NAACP Image Award nominations, a Coretta Scott King honor, the Scott O’Dell Award for Historical Fiction and a Christopher Award. Her work has been named to ALA Notable Books and Bank Street Best Children’s Book lists and she lives in the Hudson Valley region of New York.

★ "An engaging, quick, and relatable read that skillfully incorporates themes of race, class, post-war American life in the North and South, and a bit of Langston Hughes' poetry. This is a story that will stay with readers long after they've finished it."—School Library Journal, Starred Review

★ "The impact on the reader could not be more powerful. A memorable debut novel."—Booklist, Starred Review

★ "A fascinating work of historical fiction . . . Cline-Ransome at her best."—Kirkus Reviews, Starred Review

★ "Finding Langston is about cultural heritage and personal growth and, at its heart, about finding home wherever you land.”—Shelf Awareness, Starred Review

"There aren’t any explosions in this spare story. Nor is there a happy ending. Instead, Langston discovers something more enduring: solace. To quote Langston Hughes: 'My black one / Thou are not beautiful / Yet thou hast / A loveliness / Surpassing beauty.'"—The New York Times