Once Upon a Winter Day (Paperback) 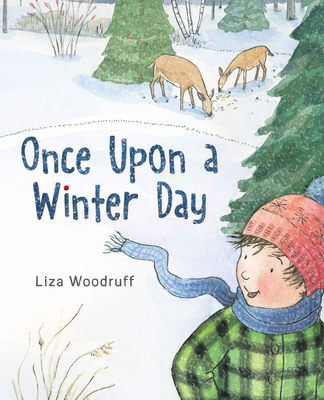 A boy learns that nature is full of stories to tell when he finds and follows a mouse's tracks in a wintery wood.

Milo wants a story, but his mom is too busy to entertain him. Instead, she encourages him to go out and play in the snow. At first, Milo is disappointed - he doesn't want to play outside, he wants a story.

But when he starts to follow a trail of mouse-prints, he discovers signs of activity all around, prompting him to ask, "What happened here?" Before long, he's using his imagination -- depicted in lush wordless spreads that capture the vividness of Milo's fantasies -- to fill in the gaps. By the time Milo comes home, he's the one with stories to tell.

A must have for the winter season, Liza Woodruff's Once Upon a Winter Day is a fun read-aloud that shares details about animal behavior from a child's perspective.

Liza Woodruff has illustrated numerous children's books, includingA Quieter Story, which she also wrote. She is also a bookseller (Flying PigBookstore) and lives with her family in Vermont.

★ "When a child’s mother is too busy for stories, he follows some tracks in the snow and makes up his own. . . . Nature tells good stories if we only get outside and look around."—Kirkus Reviews, Starred Review

★ "Words and pictures work together to tell a taut and just-right-for-the-audience suspenseful tale. Mixed-media illustrations evoke the majesty of the wintry landscape but keep the focus on Milo's—and the mouse's—small journey. Young viewers will enjoy doing some noticing of their own: details such as a berry dropped by a cedar waxwing that the mouse brings back to its mate make the book even more satisfying."—The Horn Book, Starred Review

★ "The limited text and detailed illustrations, done in mixed media, capture a wide variety of wild animals and the interplay among them as they search for food and try to survive. Superb illustrations that carry the story along make this an outstanding choice for collections seeking winter stories."—School Library Journal, Starred Review

★ "Woodruff’s (A Quieter Story) spare, evocative text ('A cold wind crept beneath Milo's scarf') quietly amplifies her expansive watercolor, pen-and-ink, and colored pencil drawings, which alternate between highly distilled snowy scenes and lushly detailed spreads; in one scene . . . It's a richly narrative landscape—one that should inspire readers to venture outside and notice stories of their own."—Publishers Weekly, Starred Review

"[A] satisfying story that can change with each rereading of Milo’s speculations and each reexamination of Woodruff’s crafty mixed media scenes."—Bulletin of the Center for Children's Books

"Using watercolor, pen and ink and colored pencil, Woodruff's soft, detailed illustrations move between Milo's sunlit morning and the snowy evening when the mouse makes its trip. Only readers are privy to both stories--and their delightfully satisfying endings."—Shelf Awareness