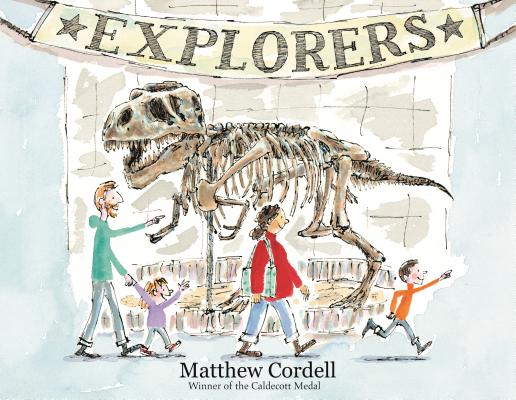 From Caldecott Medalist Matthew Cordell, Explorers is a new picture book about an extraordinary trip to a museum.

When a family goes to a local museum, a boy notices a homeless man sitting outside, making brightly colored origami birds. He convinces his dad to buy a bird the man makes just for him.

Once inside the museum, his little sister takes the bird and launches it into the air. Is it lost? Soon another boy helps him look, and the paper bird brings two families—and two new friends—together.

With the style he used in Wolf in the Snow, Matthew Cordell shows how an ordinary family outing can be both extraordinary and magical.

Matthew Cordell is the author and illustrator of Caldecott award winner Wolf in the Snow, Trouble Gum, Another Brother, hello! hello!, and Wish. He has illustrated the books of renowned authors including Philip Stead (Special Delivery), Rachel Vail (the Justin Case series), and Gail Carson Levine (Forgive Me, I Meant To Do It). He lives outside of Chicago with his wife, the novelist Julie Halpern, and their two children.

"How he ultimately loses his flying toy and his family—temporarily —in the vast building, and the way in which Caldecott Medalist Cordell concludes his wordless tale is most satisfactory. Through his loose illustration style, done in pen and ink with watercolor, he uses various perspectives to tell this charming tale of kindness and friendship. Is it coincidence, or is it “Magic?” — Booklist, starred review

"Cordell brilliantly tells the story of a regular outing. The family dynamics, as displayed through the body language and facial expressions of the characters, are touching and authentic. ...The pen-and-ink with watercolor illustrations are compelling and thought-provoking, telling the story in its entirety yet allowing readers plenty of room for their own predictions and interpretations. ...A substantial picture book about the very best kind of magic. "--School Library Journal

"[A] boy sets out with his family to a natural history museum, stopping on the way in to buy a wind-up flying toy from a street vendor seated beneath a sign that reads “Magic.” It flies beautifully, murmuring “KSSSSHH,” and the boy can’t resist launching it inside, past the dinosaurs and the statues, until another boy, whose family has brown skin and whose mother and younger sister wear hijabs, catches it deftly.... In loosely drawn panels, the boy’s shifting emotions make him easy to empathize with as he’s by turns baffled, tense, and vexed by the conflict between wanting his toy and wanting to be generous."--Publishers Weekly

Praise for WOLF IN THE SNOW

"Caught in a blizzard on her way home from school, a girl in a red parka discovers a wolf pup left behind by its pack. Cordell's story is wordless, but there's a soundtrack: the cub whines, and distant howls reveal the pack's presence over the next hill. .. The girl's story is a hero's journey, and Cordell tells it with skill and heart."--Publishers Weekly, starred review

"This nearly wordless picture book is a tender, never precious story of kindness and cooperation. Expect this wintry tale to bring only warmth."--Booklist, starred review

""Cordell’s landscapes do a wonderful job showing the vastness and desperation of the girl’s journey, his blended watercolors of the snow and trees adding eloquence to the experience. A heartwarming adventure about helping others, best shared one-on-one to pore over the engaging images."--School Library Journal, starred review

"A near-wordless story of kindness repaid.... What distinguishes this book are the many feelings that Cordell's pen-and-ink-with-watercolor illustrations capture so well—cold, fear, courage, exhaustion, relief—keeping readers hooked to the end. Deeply satisfying."--Kirkus Reviews, starred review

"Cordell’s pen-and-ink illustrations balance detail and emotion...The setting is brought to life through changing sky colors, cold breaths, and extensive snowscapes in watercolors. The handlettered, inky text, wordless except for sound effects, supports the cinematic feel created through the use of varying perspectives and loosely demarcated panels."--Horn Book, starred review

"This winner of the 2018 Caldecott Medal underscores the power of illustration to develop a sweetly suspenseful plot, full range of emotion and core belief in getting beyond 'me first.'"--San Francisco Chronicle

"In this beautiful wordless picture book, a child sets out for a walk and discovers a wolf pup separated from its pack. The journey that follows is difficult and shows the power of kindness and bravery. Reminiscent of William Steig's Brave Irene, Cordell's book is a perfect choice for the dark days of winter." --IndieBound

"Wisely retaining the natural tension and suspicions that exist between human and wolf, Cordell subverts the dynamic by allowing his characters to defy their instincts and find the strength within them to offer kindness under duress."--Huffington Post