Tales from the Treehouse: Too Silly to Be Told . . . Until NOW! (The Treehouse Books) (Hardcover) 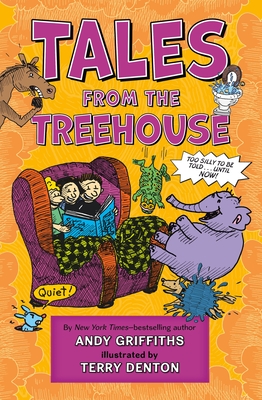 International author-illustrator superstar duo Andy Griffiths and Terry Denton are back, and this time they've cooked up a hilarious book of 13 standalone stories to complement their beloved chapter book series.

A lot of stuff happens in our ever-expanding treehouse.

Not everything gets into the books.

These are some other things that happened to us…

Surreal, funny and supremely silly—all with the spirit of the Treehouse—come on up to hear some Tales from the Treehouse.

Andy Griffiths is the New York Times bestselling author of The Day My Butt Went Psycho!, Zombie Butts from Uranus!, and Butt Wars! The Final Conflict, as well as the Treehouse Series and Killer Koalas from Outer Space. In 2007, he became the first Australian author to win six children’s choice awards in one year for Just Shocking! He is passionate about inspiring a love of books in his young readers, and works as an ambassador for the Indigenous Literacy Project, which provides books and literacy resources to remote indigenous communities around Australia. Andy is a big fan of Dr. Seuss and of cauliflower. He lives in Melbourne, Australia, and is Australia’s most popular children’s writer.

Terry Denton is known for his humorous illustration style and has worked with Andy Griffiths on the Treehouse series and the JUST! books among others. He lives by the sea in Australia with his wife, three kids, and a pop-up toaster that only toasts on one side.