A Pocketful of Poems (Paperback) 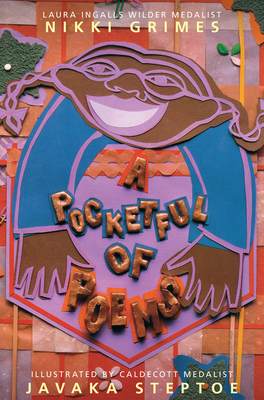 Tiana has a pocketful of words: green words like spring, night words like moon, and words with wings, like angel. Each word is the inspiration for a pair of poems—one, lyrical free verse and the other, haiku. The paired poems reflect Tiana’s lively spirit and urban outlook and are showcased in Javaka Steptoe’s inventive collages, which include a wide range of materials, from faucet handles to pumpkin seeds to a hand-sculpted, gilded alphabet. A fusion of two remarkable creative talents, A Pocketful of Poems is an engaging portrait of a down-to-earth girl who has a way with words, as well as a tantalizing introduction to poetry. Author’s note on haiku.

Nikki Grimes is a New York Times best-selling author of many books for children, including Bronx Masquerade, which won the Coretta Scott King Award, and Words with Wings, which won a Coretta Scott King Author Honor Award and the Laura Ingalls Wilder Medal. An accomplished poet, novelist, journalist, and educator, she was born and raised in New York and now lives in the Los Angeles area. Visit her online at nikkigrimes.com and on Twitter @nikkigrimes9.

Javaka Steptoe is a Caldecott Medalist, Coretta Scott King Award winner, and New York Times best-selling picture book creator. He has illustrated several books for children, including Jimi: Sounds Like a Rainbow, A Story of the Young Jimi Hendrix by Gary Golio, A Pocketful of Poems by Nikki Grimes, and Radiant Child, which he also wrote. He lives in Brooklyn, New York. Visit him online at javaka.com and on Twitter @javaka_steptoe.

"Grimes (Jazmin's Notebook) boils poetry down to its essence in this picture book homage to words—a must-read for aspiring poets and writers. Narrator and girl poet Tiana begins with an invitation to join her in wordplay, and the accompanying illustration depicts her, literally, with hands outstretched and bearing what appear to be carved letters in her palms. The poem "Tiana" launches the volume, then the heroine leads readers through the seasons with more than a dozen words, from "Spring" to "Gift" at Christmastime. Each spread introduces the chosen word in a brief poem, then highlights the same word in a haiku. Tiana's bubbling personality shines forth from each verse, and Steptoe (In Daddy's Arms I Am Tall), in an extraordinary feat, sculpts each of his character portraits from construction paper in a single, uninterrupted linear outline. His glorious mixed-media collages make the transition from intimate interior scenes to electric urban landscapes. A standout spread for "Harlem," depicts a rooftop image of Tiana and her father; the words of the haiku comprise a display of fireworks: "Harlem—July Fourth/fireworks rainbow the night with/bursts of dazzling light." Readers can only hope that this dynamic duo has many more pockets full of poems."—Publishers Weekly, Starred

"There's so much vibrant energy and freshness in this collaboration, the book will dance into the hearts of children right away."—Booklist, ALA, Starred Review

"A playful and thoroughly successful pairing of words and pictures."—School Library Journal