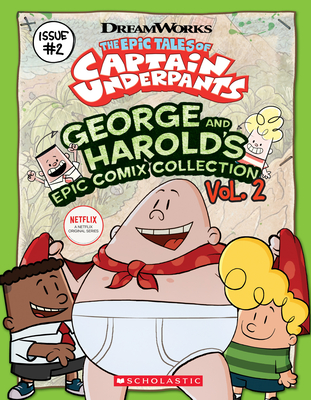 This collection of Captain Underpants TV comics features some of the Waistband Warrior's stretchiest and most exciting bad-guy battles!

This second collection features even more of George and Harold's hilarious comix from the first three seasons of the TV show -- nearly 200 pages of comics total! Each epic adventure features a brand-new villain from the hit Netflix TV series.

Praise for The Epic Tales of Captain Underpants, season 1:

"The humor is smart and silly, qualities more closely linked than adult society likes to give out... This is good, healthy stuff." -- Los Angeles Times


"Great voice acting, fun animation, and funny stories that both kids and their immature parents (like us) can get into. What more do you want in an animated series?" -- Decider


"Captain Underpants may thrive on being juvenile (its main characters are kids, after all), but it never talks down to its audience." -- The Daily Dot