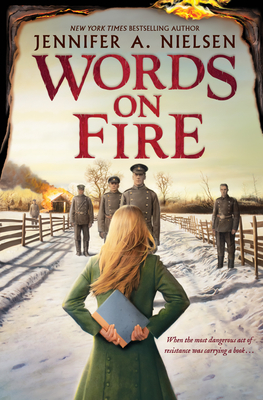 New York Times bestselling author Jennifer A. Nielsen transports readers to a corner of history with this inspiring story of a girl who discovers the strength of her people united in resisting oppression.
Danger is never far from Audra's family farm in Lithuania. She always avoids the occupying Russian Cossack soldiers, who insist that everyone must become Russian -- they have banned Lithuanian books, religion, culture, and even the language. But Audra knows her parents are involved in something secret and perilous.

In June 1893, when Cossacks arrive abruptly at their door, Audra's parents insist that she flee, taking with her an important package and instructions for where to deliver it. But escape means abandoning her parents to a terrible fate.

As Audra embarks on a journey to deliver the mysterious package, she faces unimaginable risks, and soon she becomes caught up in a growing resistance movement. Can joining the underground network of book smugglers give Audra a chance to rescue her parents?

Jennifer A. Nielsen is the acclaimed author of the New York Times and USA Today bestselling Ascendance Series: The False Prince, The Runaway King, The Shadow Throne, and The Captive Kingdom, coming in Fall 2020. She also wrote the New York Times bestselling Mark of the Thief trilogy: Mark of the Thief, Rise of the Wolf, and Wrath of the Storm; the stand-alone fantasy The Scourge; the historical thrillers A Night Divided, Resistance, and Words on Fire; the second book in the Horizon series, Deadzone; Book Six of the Infinity Ring series, Behind Enemy Lines; and The Traitor's Game series: The Traitor's Game, The Deceiver's Heart, and The Warrior's Curse. Jennifer lives in northern Utah with her husband, their children, and a perpetually muddy dog.

Praise for Words on Fire:

* "Gripping . . . Audra's story deserves a place on the shelf next to Lois Lowry's Number the Stars and Marcus Zusak's The Book Thief." -- Booklist, starred review

"[This] adventure about a little-known place and time . . . delivers action and suspense." -- Kirkus Reviews

"There is much on offer in this novel: family love, patriotism, magic, and the importance of books . . . Highly recommended." -- School Library Connection

"The edge-of-your-seat climax places readers amidst the gritty, horrifying street battles of the Warsaw Ghetto and pays tribute to those who sacrificed themselves so others would live... Historical fiction at its finest, this informs, enlightens, and engages young readers." -- School Library Journal

"Suspense mounts continually as Chaya survives her ordeals, gaining strength and faith in her mission. The courage and self-sacrifice of many characters is inspiring." -- Publishers Weekly


Praise for A Night Divided:

"Absorbing and deeply suspenseful, with plenty of ticking-clock tension... an eye-opening glimpse of history." -- Bulletin of the Center for Children's Books

"A marvelously crafted historical novel about courage, perseverance and the will to survive, A Night Divided excels in every regard." -- The Reading Eagle

"Distinct supporting characters... demonstrate the harrowing choices people made to survive, encouraging readers to consider what they would have done if fate and history had cast them into the story... The novel's strong setting and tense climax will keep readers engrossed and holding their breath until the last page." -- School Library Journal

"History buffs will drool over the magnificently told tale, but even reluctant readers will become immersed in the tension-filled exploits." -- Voice of Youth Advocates

"Like Anne Frank before her, Gerta is small but mighty, a hardheaded heroine who dreams up big ideas and refuses to give up in the face of adversity and danger." -- Publishers Weekly


Praise for The Traitor's Game:

"The next big YA fantasy." -- Entertainment Weekly

"We were immediately caught up in Kestra's story, plotting beside a heroine made of strength, bravery and intelligence. Her complicated relationship with Simon and the danger sewn into every moment of her father's palace politics kept us flipping pages in time with each jaw-dropping plot twist." -- Justine Magazine

"Fantasy, action and romance combine for a whirlwind ride in Jennifer A. Nielsen's The Traitor's Game!" -- Girls' Life

"Nielsen creates wonderful characters in all of her novels, and she is especially talented at writing complex, intriguing females who refuse to fit into any neat categories. The first in her engrossing Traitor's Game series introduces readers to another fascinating heroine, who disrupts the plans and plots laid to trap her and insists on controlling her own narrative.... Engrossing, emotional and offers plenty of promise for the series to come." -- RT Book Reviews

"This rip-roaring tale has action galore with battle scenes, kidnappings, murder, intrigue, and romance.... Nielsen has created a compelling world where little is as it seems." -- School Library Connection

"Nielsen does a masterful job keeping readers off guard while tightening the screws of tension throughout, satisfying even the most reluctant readers." -- School Library Journal

"The twists and turns of the plot make for compelling reading that should especially entertain fans of Nielsen's Ascendance trilogy." -- The Horn Book

"The Traitor's Game is intrigue and adventure with a bold heroine, some forbidden romance and plenty of twists along the way." -- Shelf Awareness

"The Traitor's Game by Jennifer A. Nielsen, is an action-packed story that leaves you yearning for more. The new book is an amazing addition to Nielsen's repertoire . . . Fit with a feisty heroine and some tough kidnappers, The Traitor's Game keeps you on the edge of your seat throughout." -- The Missourian

"Kestra may be one of my favorite characters of all time. She is courageous, bold beyond belief and also positively petulant, with a tendency for tantrums. The perfect protagonist for this adventurous, action-packed fantasy. Mixed with a bit of magic, a completely captivating saga is created; a stellar start to a tempting trilogy." -- Buried Under Books

"If you like your heroines fierce, your heroes protective, their loyalties divided, their missions complex, their motivations hidden, their lives full of secrets, The Traitor's Game is an absolute must." -- Fiktshun


Praise for The Scourge:

"A strong, feisty main character... narrates a story that is equal parts adventure, mystery, and political intrigue." -- The Horn Book

"Ani's willingness to help others, a hard battle in herself as she tries to get over long-held assumptions, demonstrates effectively how emergencies can bridge distances." -- Bulletin of the Center for Children's Books

"Nielsen provides readers with a strong, three-dimensional heroine and a plot that will keep readers guessing." -- School Library Connection

"The characters are well defined and memorable. Feisty Ani, a likable character who is thoughtful and strong, drives the story forward and keeps readers wanting to know more... A solid choice for readers who enjoy tales of strong heroines set in the ever-popular dystopian genre." -- School Library Journal


Praise for the Ascendance Trilogy:

A Chicago Public Library "Best of the Best" Children's Book

"Sage proves to be a compelling character whose sharp mind and shrewd self-possession will make readers eager to follow him into a sequel." -- The Wall Street Journal

"A fast-paced and thrilling read with twists and turns that never let up." -- School Library Journal

"Should appeal to fans of... Suzanne Collins... [A] surefire mix of adventure, mystery, and suspense." -- The Horn Book