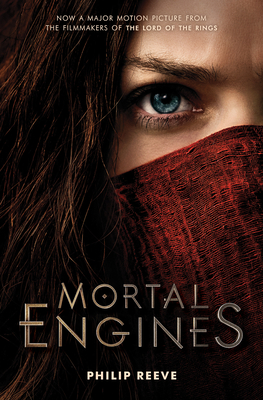 This is book number 1 in the Mortal Engines series.

The epic city-eat-city adventure is now a major motion picture produced by Peter Jackson!
"A breathtaking work of imagination, Hester Shaw is a heroine for the ages. The moment we finished reading this book we knew we wanted to make it into a movie." -- Producer Peter Jackson

London is hunting again. Emerging from its hiding place in the hills, the great Traction City is chasing a terrified little town across the wastelands. Soon London will feed.

In the attack, Tom Natsworthy is flung from the speeding city with a murderous scar-faced girl. They must run for their lives through the wreckage -- and face a terrifying new weapon that threatens the future of the world.

Philip Reeve is the bestselling author of the Mortal Engines quartet, which is now a major motion picture, and the award-winning Fever Crumb series. His other books include the highly acclaimed Here Lies Arthur and No Such Thing As Dragons. He lives in England with his wife and son. Visit him online at philip-reeve.com.

Praise for the Mortal Engines series:

"Philip Reeve has created a range of intriguing characters, following their adventures in our strange future world. [The series] presents a stunning look into the future, when all of Earth's major cities are now mounted on wheels, roaming across the landscape as massive Traction Cities. Our society has built itself on the principals of Municipal Darwinism - this basically involves the bigger cities hunting down, and consuming, the smaller ones. And that's only the backdrop to an original and emotional personal story. If you haven't read the books, you should." -- Peter Jackson, on Facebook

*"A page-turner, this adventure in a city-eat-city world will have readers eagerly suspending disbelief to follow the twists and turns of the imaginative plot." -- Booklist