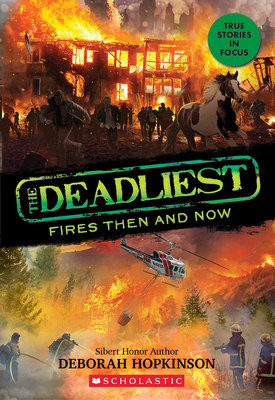 Perfect for fans of I Survived and the Who Was series, and packed with graphics, photos, and facts for curious minds, this is a gripping look at the deadliest fires in American history.

As the sun sank over the town of Peshtigo, Wisconsin, one warm October night in 1871, a smoky haze hung in the dry air. There had been little rain, and small fires had been rolling through town continuously since the Summer. For weeks the people had tried to protect their homes and businesses from fire. But they could not protect themselves from what would culminate in the deadliest fire in American history.

As industrialization surged across the country, and Westward colonization leveled forests to build cities, fires became a mainstay in American life. And as populations grew, so too did the human toll that fire could exact. Through the nineteenth and twentieth centuries, Americans searched for new and innovative ways to combat the threat of fire. And with climate change threatening to set the whole world aflame, we are once again in a fight for our planet’s future.

Through the eyes of scientists, witnesses, and survivors of terrible fires alike, Sibert Honor author Deborah Hopkinson brings the horrific history of deadly fires to life, tracing a line from the Peshtigo and Great Chicago fires of 1871 to the wildfires raging in the western United States today. Filled with more than 50 period photographs and illustrations, facts, and pull-out boxes for eager nonfiction readers.

Deborah Hopkinson is the highly acclaimed author of thrilling, accessible, and compelling nonfiction for every reader. She has written over forty award-winning books, including Titanic: Voices from the Disaster, a YALSA Excellence in Nonfiction Award Finalist and Sibert Honor Book; D-Day: The World War II Invasion that Changed History; We Had to be Brave: Escaping the Nazis on the Kindertransport, which was a Kids' Book Choice Award Nominee and a Sydney Taylor Notable Book; We Must Not Forget; the forthcoming Race Against Death; and her series for Grades 2-5, The Deadliest, which are action-packed, photo-filled nonfiction titles about disasters throughout history. Deborah lives outside Portland, Oregon.

Praise for We Must Not Forget:

"Hopkinson has created a rich resource for teachers, librarians, and students." -- The Horn Book

"An important and timely book that spotlights the untold stories of survivors of the Nazi regime and the Holocaust." -- School Library Journal

Praise for We Had to Be Brave: Escaping the Nazis on the Kindertransport:

* "Historical context, personal stories, and letters are seamlessly integrated in this history of frightened refugee children in a new land and their brave parents' making 'the heart-wrenching decision' to send their children away with strangers to a foreign country. Well-crafted, accessible, and essential." -- Kirkus Reviews, starred review

"[A] moving tribute to the organizers of the Kindertransport and to the courage of the children involved. Generously illustrated with black-and-white photographs, the book is extremely well researched and a valuable contribution to Holocaust literature." -- Booklist

Praise for Dive! World War II Stories of Sailors & Submarines in the Pacific:

Praise for Titanic: Voices from the Disaster:

A YALSA Award for Excellence in Nonfiction Finalist

An ALA Notable Children's Book

A Kirkus Reviews Best Young Adult Book of the Year

Praise for Up Before Daybreak:

Praise for Shutting Out the Sky:

An ALA Notable Book