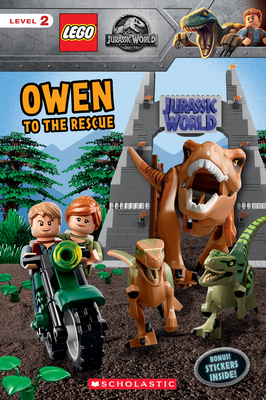 By Scholastic, Meredith Rusu
$4.99
On Our Shelves Now

A prequel to the animated Jurassic World told through LEGO! Includes one sheet of stickers.
An all-new exhibit is set to open in LEGO Jurassic World, and it's up to Owen and Claire to make sure it goes off without a hitch in this all-new reader with stickers!

With the grand opening of Simon Masrani's super-secret dinosaur exhibit just days away, only one thing is missing -- the dinosaurs! Owen Grady's first job at Jurassic World is to deliver the dinosaurs to the new attraction, or Simon Masrani will fire the person who hired Owen -- his new assistant, Claire Dearing.

Filled with LEGO humor and tons of great dinosaurs, this laugh-out-loud reader is perfect for fans of LEGO and Jurassic World alike!