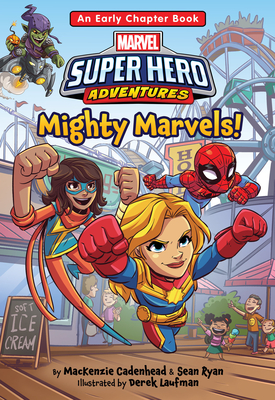 This is book number 4 in the Super Hero Adventures Chapter Books series.

MacKenzie Cadenhead is a trained dramaturg and former editor for Marvel Comics. She is the author of the middle grade fantasy novel, Sally's Bones, and of the young adult science fiction thriller Sleeper. She lives in New York with her family and if she could have any super power, she'd definitely go with super-strength.
Sean Ryan has worked in the comic book industry for over a decade, having worked for Marvel and DC Comics. Currently, Sean lives in Los Angeles, CA writing comics for a variety of publishers, including New Suicide Squad for DC Comics, which debuted at number four on New York Times Bestsellers List for Paperback Graphic Books. If he could have any super power, he'd have to go with flight.