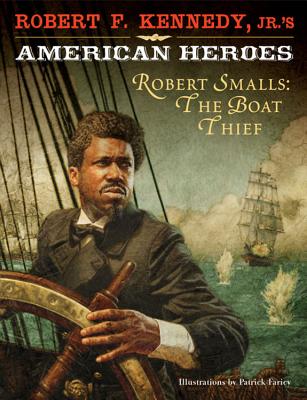 On a moonlit night in the spring of 1862, six slaves stole one of the Confederacy's most crucial gunships from its wharf in the South Carolina port of Charleston, and delivered it to the Federal Navy.  This audacious and intricately coordinated escape, masterminded by a 24-year-old sailor named Robert Smalls, astonished the world and exploded the Confederate claim that Southern slaves did not crave freedom or have the ability to take decisive action. Robert Smalls's heroic career had only begun.  A brilliant sailor and strategist, he was quickly promoted to the rank of captain in the Federal Navy where he served courageously in many critical battles.  Not only was Smalls a great soldier, he was also a powerful activist, whose appeal to Abraham Lincoln convinced the president to enlist 5,000 former slaves, shattering the color barrier that had kept black men out of the service.  Smalls drew great crowds as an eloquent public speaker, and his outstanding character inspired the broad public support that encouraged Lincoln to ratify the Emancipation Proclamation. Robert F. Kennedy, Jr. tells the story of another great American hero, a man who did not flinch in the face of extraordinary dangers--a man whose dedication to the cause of freedom made him one the most important participants in the American Civil War.