Unicornado: Another Phoebe and Her Unicorn Adventure (Paperback) 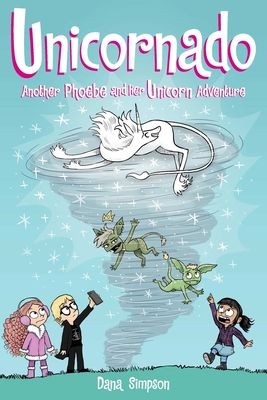 This is book number 16 in the Phoebe and Her Unicorn series.

Get ready to experience a whole new thrilling sequence of adventure and discovery in the delightful, New York Times bestselling Phoebe and Her Unicorn series by Dana Simpson.

A new school year means many things for nine-year-old Phoebe Howell and her unicorn best friend, Marigold Heavenly Nostrils. They prepare for a school dance (lame!), meet new friends (ghosts and gnomes and goblins, OH MY!), and even experience a rare supernatural phenomenon called a Unicornado! In fact, sometimes things get almost too magical. Marigold’s presence attracts pixies, talking birds, and a sphinx, turning Phoebe’s house into a magical sylvan glen. And Marigold even briefly transforms Phoebe into a goblin. Whether they’re trick-or-treating, singing showtunes, or casting new spells, every day for Phoebe and Marigold is an adventure thanks to the power of friendship.

Dana Claire Simpson grew up in Gig Harbor, Washington, drawing the entire time. She eventually graduated from The Evergreen State College, despite having spent all her time drawing, and not always for credit.

From 1998 to 2008, she drew the internet comic strip Ozy and Millie. After winning the Amazon-sponsored Comic Strip Superstar Contest in 2009, Andrews McMeel Syndication signed her to a development deal for Heavenly Nostrils, which was later renamed Phoebe and Her Unicorn.

She currently lives in Santa Barbara, California, with her tech genius spouse and her fairly stupid cat.