The Time of Green Magic (Paperback) 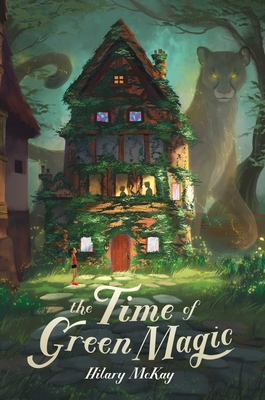 From award-winning author Hilary McKay comes “a memorable family story” (Booklist, starred review) about a girl adjusting to her new home—with the help of a little magic.

When Abi’s father marries Max and Louis’s mom, their families start over together. Abi suddenly finds herself the middle child, expected to share far too much—especially with grubby little Louis. Then they move into an eerie, ivy-covered house, big enough for all of them.

But for the children, strange things start to happen in that house. Abi reads alone, and finds herself tumbling so deep into books, they almost seem real. Louis summons comfort from outdoors, and a startling guest arrives—is it a cat or something else? Max loses his best friend…and falls in love. Meanwhile, Louis’s secret visitor is becoming much too real. Now Abi, Max, and Louis must uncover the secrets of their new home—for there can be danger in even the most beautiful magic.

From award-winning author Hilary McKay comes a story that is at once enchanting and thrilling—if you don’t get lost in it first.

* "McKay leaves enticing ambiguity between the real and fantastical, creating an unassailable magic of her own in an incandescent portrait of family, friendship, and imagination."
— Publishers Weekly, starred review

* "McKay draws on her genius in creating amiable, chaotic families containing members with their own personal dramas; the clan is an endearing one, and their frustrations with family and friends seamlessly blend into the fantasy element...This would make an excellent British counterpart to American early fantasies like Law’s Savvy."
— BCCB, starred review

* "McKay...creates a captivating world to fall into, full of honesty and humor."
— The Horn Book, starred review