The Patron Thief of Bread (Hardcover) 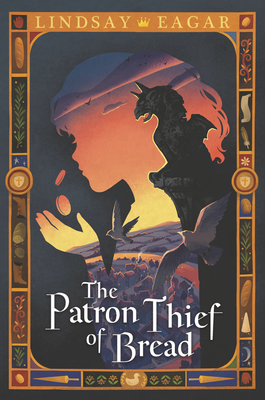 A beautifully crafted middle-grade novel spiced with magic—and gargoyles!—from the acclaimed author of Hour of the Bees and Race to the Bottom of the Sea.

Fished from the river as an infant and raised by a roving band of street urchins who call themselves the Crowns, eight-year-old Duck keeps her head down and her mouth shut. It’s a rollicking life, always thieving, always on the run—until the ragtag Crowns infiltrate an abandoned cathedral in the city of Odierne and decide to set down roots. It’s all part of the bold new plan hatched by the Crowns’ fearless leader, Gnat: one of their very own will pose as an apprentice to the local baker, relieving Master Griselde of bread and coin to fill the bellies and line the pockets of all the Crowns. But no sooner is Duck apprenticed to the kindly Griselde than Duck’s allegiances start to blur. Who is she really—a Crown or an apprentice baker? And who does she want to be? Meanwhile, high above the streets of Odierne, on the roof of the unfinished cathedral, an old and ugly gargoyle grows weary of waiting to fulfill his own destiny—to watch and protect. Told in alternating viewpoints, this exquisite novel evokes a timeless tale of love, self-discovery, and what it means to be rescued.

Lindsay Eagar is the highly acclaimed author of three previous middle-grade novels: Hour of the Bees, Race to the Bottom of the Sea, and The Bigfoot Files. She lives in the mountains of Utah with her husband and their two daughters.

The engrossing story is imbued with real suspense and a gorgeous warmth, and it’s a particular joy to watch Duck blossom. . . Vivid descriptions and gentle introspection easily transport readers into the teeming medieval world, but at its core, it’s an utterly enchanting exploration of family in its many forms.
—Booklist (starred review)

[M]ore impressive are the ways she [Eagar] not only wields atmospheric language to make both her vaguely medieval, vaguely French setting and the art and craft of bread making vivid, but kneads her protagonist (the two-legged one) into a resilient, responsible soul who can stay true to everyone she loves no matter how difficult or disagreeable. . . Ambitious, absorbing, and, at times, mouthwatering.
—Kirkus Reviews (starred review)

Eagar has written a complex and layered novel, with a vivid setting of medieval France and powerful themes of home and community.
—School Library Journal (starred review)

Spectacular. . . [Eagar] is a master of nuanced characterizations and setting descriptions. Duck's story alternates with chapters that feature a gargoyle's grumpy and poignant commentary, adding a fantastical element and cathedral-high perspective to the street-level action. Duck's heartrending quandary about what makes a home is as relevant today as ever.
—Shelf Awareness (starred review)

The plot, borne along by Eagar’s flawless, compelling voice, swells like a loaf of bread proofing: slowly, but developing delicious flavor as it grows. . . . the story comes to a hopeful conclusion that is balanced by wry, but not bitter, complexity.
—The Bulletin of the Center for Children's Books (starred review)

Each member of the Crowns is given their own destiny. . . They become what they want to become, not what is necessarily a socially acceptable, predictable choice. This sort of closure provides an emotionally realistic ending to the book.
—School Library Connection

The gifted Lindsay Eagar, author of 'Hour of the Bees' and 'Race to the Bottom of the Sea,' offers a lovely tale of found family, of redemption and forgiveness in this beautifully written novel set in the fictional medieval-era French town of Odierne. . . . Eagar's beautiful narrative paints a vivid picture of life in a medieval-era French town and the Crowns' hard lives on the run.
—The Buffalo News

A riveting novel full of tension and action; sensory-rich scenes and settings; and vividly portrayed, believable characters. . . There are revelations at the end (one involving the gargoyle narrator), but they’re as nuanced as the rest of the novel. Eagar’s deep themes never feel tacked on but instead are thoroughly kneaded into her characters and story.
—The Horn Book