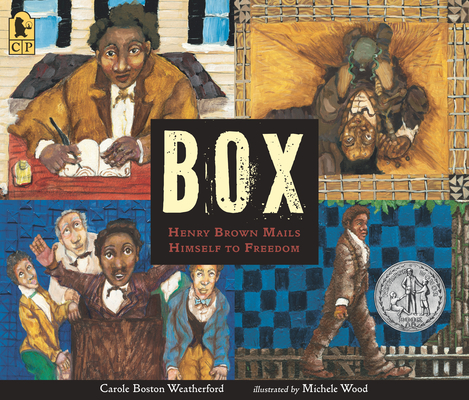 In a moving, lyrical tale about the cost and fragility of freedom, a New York Times best-selling author and an acclaimed artist follow the life of a man who courageously shipped himself out of slavery.

What have I to fear?
My master broke every promise to me.
I lost my beloved wife and our dear children.
All, sold South. Neither my time nor my body is mine.
The breath of life is all I have to lose.
And bondage is suffocating me.

Henry Brown wrote that long before he came to be known as Box, he “entered the world a slave.” He was put to work as a child and passed down from one generation to the next — as property. When he was an adult, his wife and children were sold away from him out of spite. Henry Brown watched as his family left bound in chains, headed to the deeper South. What more could be taken from him? But then hope — and help — came in the form of the Underground Railroad. Escape!

In stanzas of six lines each, each line representing one side of a box, celebrated poet Carole Boston Weatherford powerfully narrates Henry Brown’s story of how he came to send himself in a box from slavery to freedom. Strikingly illustrated in rich hues and patterns by artist Michele Wood, Box is augmented with historical records and an introductory excerpt from Henry’s own writing as well as a time line, notes from the author and illustrator, and a bibliography.

Michele Wood is an illustrator, painter, filmmaker, and designer with a master’s in divinity from Christian Theological Seminary. She has won numerous awards for her illustration work, including a Coretta Scott King Illustrator Award, as well as a nomination for an NAACP Image Award. Box: Henry Brown Mails Himself to Freedom is her first book with Candlewick Press. She lives in Indianapolis, Indiana.

Brown's story never gets old, and this illustrated biography is rich in context and detail that make it heavier on history and better for slightly older readers than, for instance, Ellen Levine and Kadir Nelson's Henry's Freedom Box (2007).Heartbreaking and legendary.
—Kirkus Reviews (starred review)

An artful and introspective retelling of the life of a remarkable man and a painful era in U.S. history. Weatherford’s text paired with Wood’s illustrations combine to offer a memorable work of nonfiction.
—School Library Journal (starred review)

Weatherford’s moving, poetic verse gives the story a very personal tone as the reader becomes immersed in Brown’s harrowing tale of loss and sorrow and his determination to be free...The mixed-media art uses collage elements effectively. Deep reds and bright blues and greens figure prominently, giving the art a somewhat vintage feel while still being vivid and vibrant. The book ends powerfully with a poem titled “AXIOM”: “Freedom / Is / Fragile. / Handle / With / Care.”
—The Horn Book (starred review)

Alongside Weatherford’s spare verses, Wood’s paintings fairly explode with vivid visual motifs of quilts and confinement, with thickly brushed images rigidly squeezed and folded within borders that strain to hold them...Middle grade- and school readers are at an ideal age to begin unpacking Brown’s story, and the harmonious interplay of word and image will invite youth with strong preference for either literary or visual formats to join in common discussion of the concept of freedom.
—Bulletin of the Center for Children's Books (starred review)

Mixed-media illustrations combine thickly textured figures and backgrounds, collage, and painted, folded paper to create images with three-dimensional qualities. As the illustrator says in her note, the pictures convey deep suffering, hope, and determination. Cubic shapes appear frequently, echoing and amplifying the six lines of each poem. Intended for older readers than Henry's Freedom Box (2007), the book artfully expresses difficult truths while being mindful of a child audience.
—Booklist