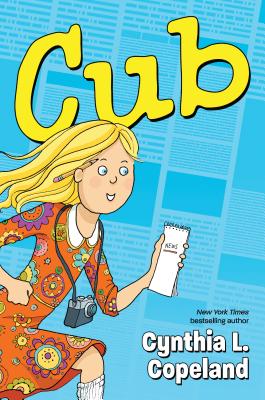 “Raina Telgemeier fans will lap this up.”
— Bulletin of the Center for Children's Books

A laugh-out-loud funny and empowering graphic memoir about growing up and finding your voice.

Twelve-year-old Cindy has just dipped a toe into seventh-grade drama—with its complicated friendships, bullies, and cute boys—when she earns an internship as a cub reporter at a local newspaper in the early 1970s. A (rare) young female reporter takes Cindy under her wing, and Cindy soon learns not only how to write a lede, but also how to respectfully question authority, how to assert herself in a world run by men, and—as the Watergate scandal unfolds—how brave reporting and writing can topple a corrupt world leader. Searching for her own scoops, Cindy doesn’t always get it right, on paper or in real life. But whether she’s writing features about ghost hunters, falling off her bicycle and into her first crush, or navigating shifting friendships, Cindy grows wiser and more confident through every awkward and hilarious mistake.

Cynthia L. Copeland is the New York Times bestselling author of more than 25 books, including Really Important Stuff My Dog Has Taught Me and The Diaper Diaries. Her books have sold more than a million copies in eight languages, and have been featured on Good Morning America, selected for Oprah’s “O List” in O: The Oprah Magazine, and recommended by Ann Landers. Ms. Copeland lives in New Hampshire with her family.

“In both its story and its buoyant artwork—the groovy coloring was done by Ronda Pattinson—Copeland gets so many things right. She gets the nuances of hippie-chic ‘70s teenage fashion. She gets the daffy chatter of cousins after Thanksgiving dinner has been eaten. ('Eat it! Eat the weird pie!') She gets the ordinary heartbreak when, again and again, Cindy’s father reflexively nourishes the ambitions of her brothers, looking past her as if she is invisible. ('You know, John, I think you’d be an excellent politician!' ) And she gets the way that Cindy’s immediate problems, like a friend scorning her in the hall, can feel as vivid and epoch-defining as Watergate or the passage of the Equal Rights Amendment . . . Cub offers a road map for the . . . Cindys of today, proposing to the awkward and the ambitious that they are not, in fact, hostage to the merciless social sorting that can happen within the confines of middle school . . . Look outward, this delightful book advises. A great big world is waiting.”
—The New York Times Book Review

“This charming, intelligent, funny book is a sharp look into the middle school ecosystem, its shifting allegiances, its hormonally charged confusions. It follows seventh-grader Cindy as she navigates cliques and crushes and takes on a role as a cub reporter under the wing of an ambitious young woman journalist. Copeland nails the cringy pre-teen humiliations, and the book also serves as a primer on lede-writing and journalistic ethics, as well as showing a person coming into her own and learning how to be the author of her own story.”
—Boston Globe

“Copeland's first graphic novel for kids successfully integrates the right balance of coming-of-age issues into those arising from her early-'70s setting; many of the latter are eerily similar to those that the country is still experiencing. This tale of middle-grade angst and self-consciousness is laced with humor and nostalgia.”
—Kirkus Reviews, starred review

“Raina Telgemeier fans will lap this up, particularly though who need a shot of courage or reassurance heading into the maelstrom of middle school.”
— Bulletin of the Center for Children's Books

“Engaging and interesting . . . this [book] made me ridiculously happy.”
—YA Books Central