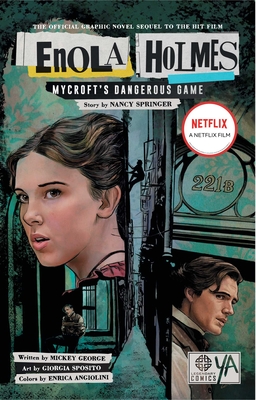 Teenage super-sleuth Enola Holmes is back at it again!  Catching up with our heroine after the events in the popular Netflix film, readers will be taken right back into Enola’s world of adventure, mystery and daring intrigue in ENOLA HOLMES: MYCROFT’S DANGEROUS GAME!

Starring Millie Bobby Brown (Godzilla vs Kong, "Stranger Things") as the young and brilliant Enola, the graphic novel features an original story that bridges the adventures of the first film with the highly anticipated sequel, Enola Holmes 2. Fans and new readers alike can connect with Enola’s spunky story as she embarks on an adventure helping (and evading!) her famous brothers – Sherlock and Mycroft (portrayed on page and screen by fan-favorite actors Henry Cavill and Sam Claflin).

Picking up where 2020’s exceptionally popular film left off, readers and fans will join Sherlock Holmes’ rebellious teen sister Enola in a thrilling adventure and uncover the new mystery that she is up against. After a mysterious group of anarchists abduct her brother Mycroft, Enola investigates his disappearance in hopes of rescuing him and recovering something precious he took from her. With the help of Lord Tewkesbury and a young boy on the streets named Shag, she uncovers the truth behind her brother's abduction and unravels a web of mystery that takes her deep into the London underground as she tries to foil the anarchists’ nefarious plot!

Nancy Spencer is the award winning author of The Books of Isle fantasy series, the Enola Holmes mystery series, and a plethora of other novels. Nancy has been named as winner or nominee of multiple awards for Juvenile, Young Adult and Adult Literature including the Edgar Allan Poe Award 2 years in a row, winner of the Carolyn W. Field Award, the Hugo Best Short Story, and also winner of the Mythopoeic Fantasy Award for Adult Literature for Best Novel.

Giorgia Sposito is an Italian comic artist who has worked for several publishers. She started as an inker for IDW Publishing on Doctor Who: Prisoners of Time and Star Trek: Khan. Since then, she has worked as an artist for Zenescope Entertaiment (Charmed, the Wonderland series), Titan Comics (Doctor Who: The Tenth Doctor series, The Many Lives of Doctor Who, and Doctor Who: The Thirteenth Doctor Vol 1: A New Beginning), and Dynamite Comics (Bettie Page & Apocatequil's Ring). In 2019, she worked for Legendary Comics on Carnival Row: Sparrowhawk. She is currently working again with Legendary Comics on Enola Holmes and on a creator-owned project for Vault Comics.

“I’m really excited for the fans to be able to continue with Enola’s story. I love that the graphic novel begins right where the film left off, so fans can jump straight back into her world.
The graphic novel looks amazing and it’s great to have another way for fans to enjoy Enola’s adventures.”
— Millie Bobby Brown, actress ENOLA HOLMES, STRANGER THINGS

"Fans of the film and newbies alike will be delighted with this exciting, characterful and witty adventure. Enola rocks as a comics character, and Victorian London feels perfect."
— Paul Cornell, screenwriter for ELEMENTARY and DOCTOR WHO