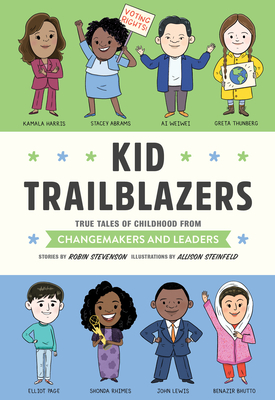 Featuring kid-friendly text and full-color illustrations, Kid Trailblazers highlights contemporary figures who have led the way in government, social activism, environmental justice, and the arts. Middle-grade readers will learn how these figures got their start as kids just like them, with impactful stories and fun facts such as:

• Angela Merkel once won a trip to Moscow, where she bought a Beatles album.
• Stacey Abrams and her siblings played pretend as librarians for fun.
• Al Gore lived in a hotel as a kid and liked to drop water balloons off the roof!

Kid Trailblazers explores the childhood stories of leaders who have taken on the most pressing issues of our time by expressing themselves and challenging the world.

Robin Stevenson is an award-winning author of thirty books for kids and teens. Her writing has been translated into a number of languages and published in more than a dozen countries. She lives with her family on the west coast of Canada.

Allison Steinfeld obtained a BFA from the School of Visual Arts in New York City. She loves to create fun and playful work that can be enjoyed by readers of all ages. She lives in Atlanta, Georgia.

“Kid Trailblazers highlight[s] a diverse array of many lesser-known leaders around the world who have paved the way for innovation and change...An important nonfiction collection of stories about influencers and leaders when they were children.”—School Library Journal, starred review

“This book helps young leaders-to-be get excited about fixing problems they spot, and they may meet some new heroes, too. For your biography-finding this school year, Kid Trailblazers is the easy solution.”—Terri Schlichenmeyer, Bookworm Sez

“Stevenson sketches her subjects’ childhoods and later impact, deftly setting the scene for each one and providing informative details, engaging quotes, and sometimes humorous anecdotes.”—Mombian

Praise for the Kid Legends series:
“Telling the true stories of famous people’s childhoods, this book inspires kids to think big and humanizes historical figures in a new and fresh way.”—CNN Underscored, on Kid Innovators by Robin Stevenson

“These reads aren’t just educational, they’re inspiring – they remind us all that we’re never too young to start dreaming! Plus – they’re a great resource for school projects!”—YAYOMG.com, on Kid Innovators by Robin Stevenson

“Kids will be drawn in.”—Chicago Parent, on Kid Activists by Robin Stevenson

“The vivid details of each activist's story, combined with vibrant illustrations, demonstrate that every civil rights hero and popular firebrand started out as children, just like the rest of us.”—School Library Journal, on Kid Activists by Robin Stevenson

“A great way to encourage kids who already love science to pursue their interests as well as to show kids who are not motivated by traditional schooling that there are many paths to greatness.”—American Scientist Magazine, on Kid Scientists by David Stabler

“Illustrate[s] a wide variety of early influences and backgrounds, proving to kids that where they come from isn't important when fixing something that is.”—Terri Schlichenmeyer, The Bookworm Sez, on Kid Activists by Robin Stevenson

“Just like history class, only hilarious.”—Tim Federle, author of Better Nate Than Ever, on Kid Presidents by David Stabler

“Full of real information, but the author made it fun and funny.”—Michael, age 9, on Kid Authors by David Stabler