Miracle on 34th Street: A Storybook Edition of the Christmas Classic (Hardcover) 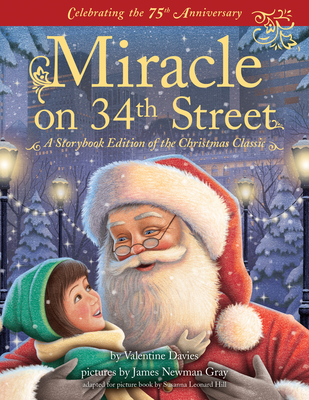 For a little girl named Susan Walker, Christmas could be any other day. She doesn't believe in Santa Claus or magic or miracles of any kind. But when she meets Kris Kringle and tells him what Christmas gifts she most wishes for, Susan finds herself hoping that maybe, just maybe, he is the real thing. Based on the original holiday classic, Miracle on 34th Street is a timeless, heartwarming children's book about generosity, imagination, and the spirit of Christmas… if you just believe.

Valentine Davies (August 25, 1905 – July 23, 1961) was an American film and television writer, producer, and director. He wrote the story for the 1947 film Miracle on 34th Street, which was given screen treatment by director George Seaton and received an Academy Award for Best Story. Davies also novelized the story, publishing a novella in conjunction with the film release.

Susanna Leonard Hill is the New York Times bestselling author of Moon’s First Friends, as well as many other award-winning books for children. She does frequent school and library visits, teaches picture book writing, and offers picture book critiques. She lives in New York's Mid-Hudson Valley with her children and two rescue dogs.