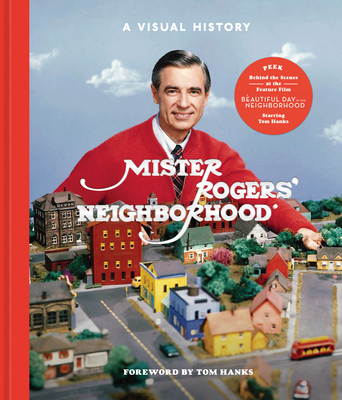 A visual celebration of Mister Rogers’ Neighborhood, America’s most beloved children’s television show, including a foreword by Tom Hanks and a peek at the making of the feature film A Beautiful Day in the Neighborhood, in theaters Thanksgiving weekend.

Go behind the scenes of Mister Rogers’ Neighborhood with this unprecedented dive into its storied history. More than fifty years ago, Fred Rogers, a modest television host, revolutionized children’s entertainment with a simple set design, quiet dialogue, and a few hand puppets playing out everyday situations. The effect was extraordinary: Mister Rogers created a relationship with millions of young viewers, each of whom felt as if they were visiting with a trusted friend. His radical kindness, acceptance, and empathy created a sacred place where everyone felt safe and valued.

Featuring exclusive photographs; a guide to the characters, puppets, and episodes; original interviews; and rare ephemera, Mister Rogers’ Neighborhood: A Visual History reveals how the show came together to have a deep impact on American culture. Discover wonderful anecdotes from Yo-Yo Ma and Wynton Marsalis as well as the actors, directors, art designers, producers, studio musicians, and more who devoted their careers to working with Fred. Chronicling the show's complete timeline—from its humble beginnings on WQED in Pittsburgh to its commemoration on the big screen in the feature film A Beautiful Day in the Neighborhood, starring Tom Hanks, based on a screenplay written by Micah Fitzerman-Blue and Noah Harpster and directed by Marielle Heller—this incredibly comprehensive book celebrates both Fred Rogers and the wonderful legacy of Mister Rogers’ Neighborhood.

Fred Rogers Productions inspires a lifetime of learning by creating quality children’s media that models an enthusiasm for learning and earns the trust of parents and caregivers.

Tim Lybarger is the creator of The Neighborhood Archive, an exhaustive online fansite for all things Mister Rogers. He is also school counselor in East-Central Illinois and lives with his family in Mahomet, Illinois.

Melissa Wagner is a writer and editor who had the honor of working with Fred Rogers on several books, including The Mister Rogers Parenting Book and Mister Rogers’ Playtime. She lives in Pittsburgh with her husband and daughter.

Jenna McGuiggan is a writer and editor who has worked with The Fred Rogers Center. She lives with her husband and four gray cats in Greensburg, Pennsylvania, the city next door to Mister Rogers’ hometown of Latrobe.

“[Mister Rogers’ Neighborhood: A Visual History] takes readers on a journey from the show’s humble beginnings in Pittsburgh to international stardom and beyond. [It’s] a complete guide to all the magical characters that came from Fred’s mind [and it] touches on the magic of Fred’s show the way no other has.”—Nerdist

“Did you love Mister Rogers’ Neighborhood as a child? Relive the beloved television show with the book’s exclusive photographs, a guide to the characters, puppets, and episodes as well as ephemera and original interviews.”—My Modern Met